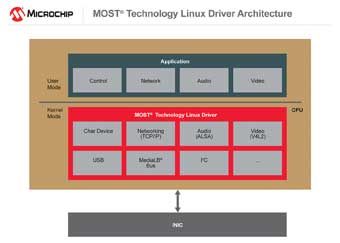 Microchip Technology Inc., a leading provider of microcontroller, mixed-signal, analog and Flash-IP solutions, announced that the MOST® Linux Driver supporting Microchip’s MOST network interface controllers has been incorporated into the staging section of the Linux Mainline Kernel 4.3 operating system. The increasing demand for reliable and simple solutions to support audio, video and data communications in cars is driving the trend toward using Linux and open-source software in combination with MOST technology, the de-facto standard for high-bandwidth automotive multimedia networking.
“We appreciate the Linux Foundation’s support in making the MOST Linux Driver part of the Linux Mainline Kernel 4.3,” said Dan Termer, vice president of Microchip’s Automotive Information Systems Division. “Incorporating this driver will make it easy for designers who are innovating the cars of the future to combine MOST technology with Linux, thereby significantly shortening time-to-market and reducing development costs.”
MOST technology is a time-division-multiplexing (TDM) network that transports different data types on separate channels at low latency and high quality-of-service. The Linux Driver allows for the transport of audio data over the MOST network’s synchronous channel, which can be seamlessly delivered by the Advanced Linux Sound Architecture (ALSA) subsystem, providing system designers the ability to easily transmit audio over MOST technology using a standard soundcard. Additionally, this driver enables the transport of video data with guaranteed bandwidth, by using the MOST network’s isochronous channel and the Video for Linux 2 (V4L2) interface. This feature results in the ability to seamlessly connect standard multimedia frameworks and players over the Linux Driver to a MOST network.