Since Apple launched the iBeacon last year many specialists have worked on the basis that the tiny transmitters will change our lives completely. Because unlike GPS and cellular mobile phone tracking beacons can locate a position within decimeters – even inside a building. They open up countless application scenarios. Now Nordic Semiconductor has also launched a beacon solution. 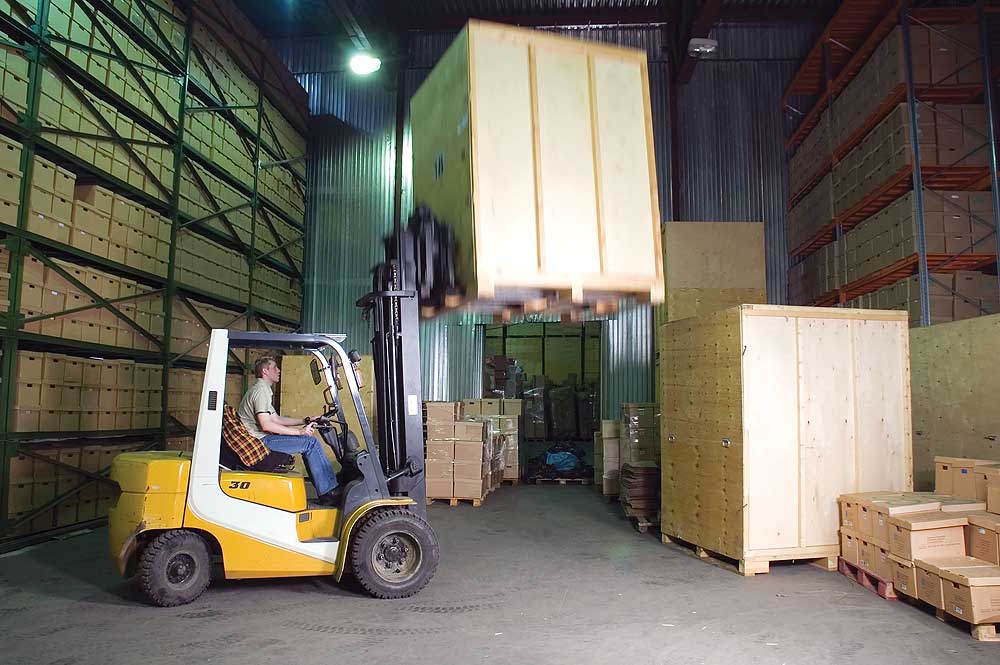 In the industrial environment, beacons can be used for applications such as time and position capture, to identify machine operation, including usage capture, or to protect valuable machinery, devices, and materials against theft. If a user requires some operating instructions or a fitter needs an error report, the beacon can supply these too. The tiny transmitters are also used to prevent driverless forklift trucks from colliding.
Beacons operate on the transceiver principle: as the name suggests, the beacons take on the role of transmitter. If a receiver, such as a smart phone, a customer-specific hand-held device, or a forklift truck fitted with the corresponding Nordic chip, moves into the sensor’s range, it is able to identify the ID and signal strength of the transmitter. 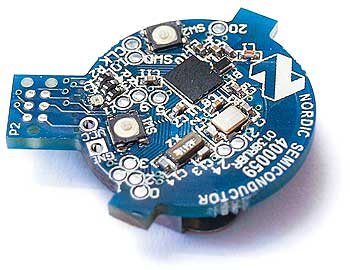 The beacon simply sends its identity to the smartphone, enabling the data associated with it to be taken from the Cloud via an app or a direct service. The ID can be used to trigger actions that the smart phone then executes. For example, it might open an Internet page, a datasheet or form, or perhaps play a video.
For example, a beacon in a fork lift truck can send its ID to an employee’s smart phone or handheld device. This sends the ID on to the server where there is a setting to state whether the employee is authorized to use the fork lift. The server will release the fork lift for use only if he is. At the same time a record is made – accurate to the second – of who has used the fork lift.

Reference design for iOS7 and Android
Apple set the basis of the technology. The manufacturer implemented the relevant functions into iOS7 on the basis of Bluetooth Low Energy (BLE) standard. Nordic Semiconductor recently presented a reference design for Bluetooth Smart Beacons. The kit consists of a complete hardware and software solution which, together with the Nordic nRFBeacon App, enables a full range of Beacon applications. These may either use Apple’s iBeacon TM standard or be based on a proprietary specification based on Bluetooth Smart. The Bluetooth Smart Beacon Kit is based on the current market leader, the multi-protocol nRF51822 Bluetooth Smart and 2.4GHz-SoC from Nordic. 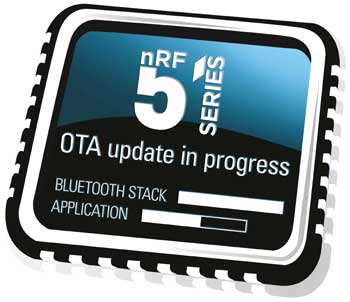 The kit contains a beacon which, with a diameter of 20mm, is hardly bigger than the CR1632 button cell battery attached to its rear, supplying the beacon with power for months on end. The relevant “nRF Beacon App” is available for free download in the Google Play Store on Android, while the app for Apple devices is available for manual download on the Nordic Website under http://www.nordicsemi.com/eng/Products/nRFready-Demo-APPS/nRF-Beacon-for-iOS. The beacon is then immediately ready for operation. The preinstalled setup is an art gallery scenario. Developers can modify this quickly and easily to make the smartphone display, for example, the operating instructions for a machine instead of details on celebrated paintings. The firmware is available from Nordic in source code form. This makes it possible to construct sample scenarios quickly and easily so that product ideas can be tested. The over-the-air device firmware upgrade service (OTA-DFU) for the nRF51822 allows for updates to the beacon firmware even while in the field. The new version 7.0 of the S110 SoftDevice also enables OTA to make flexible firmware upgrades, something that is not possible on the alternative, static ROM/OTP-based ULP wireless SoCs. So upgrades to stacks and application firmware for the nRF51822 and nRF51422 SoCs can be carried out quickly and easily via the device’s own wireless connection. The OTA-DFU function enables full upgrades to applications as well as protocol stacks and is not restricted to partial upgrades and troubleshooting.

To determine distance, Nordic’s beacon technology uses the S110 SoftDevice Proximity Service by Nordic. This uses the Received Signal Strength Indication (RSSI) values of the nRF51822 transceiver. The RSSI level differs according to the model of smartphone, but despite this the Smart Beacon kit’s tuning function ensures even performance.
The beacon also scores with its low production costs, low energy consumption and a transmission range of several meters. The wide distribution of Bluetooth Low Energy means that it will be used increasingly in many different areas.

The nRF51822 – flexible multi-talent
The nRF51822 is an extremely flexible multi-protocol SoC, designed especially for Bluetooth Low Energy and 2.4 GHz ultra low power wireless applications. It is based on a 32-bit ARM® CortexTM M0 CPU with 256kB or 128kB flash and 16 kB RAM memory. The integral 2.4GHz transceiver supports both Bluetooth Low Energy and 2.4GHz operation. When actively transmitting the energy-saving nRF51822 requires only 5.5mA. With its fast data transfer and idle and sleep modes, overall energy consumption is very low. A single power source is sufficient, and developers can choose between a linear single chip voltage regulator (1.8-3.6V), a direct mode (1.8V) and a DC/DC-Buck/Boost converter (2.1-3.6V). During operation this converter can be dynamically controlled, peak current strengths are below 10mA (3V).

At Nordic the free Bluetooth Low Energy Protocol for operation in the role of the peripheral communications side is called S110 and as binary it occupies only around 80kB of the memory. At 40kB or 170kB the other flash memories are available for the actual application. Thanks to 31 integrated GPIOs, which are individually assigned to different pins, as well as PWM, ADC and other features, an additional microcontroller is superfluous. This saves space, money and energy.