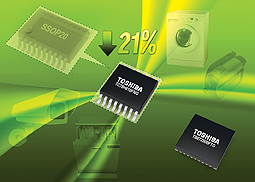 applications.
TC78H610FNG is an H bridge driver for low voltage brushed DC motors, such as those used in home appliances and battery-powered equipment. Supplied in a SSOP16 package, it can reduce the required mounting area by 21% compared to conventional products with similar functionality housed in SSOP20 packages. This allows reduction in the size of equipment and the cost of the PCB.
The TC78H610FNG can control two brushed DC motors or one stepping motor. It has an operating voltage range from 2.5 to 15V and maximum output current of 1.0A. Output ON resistance is 1.2Ω (typical).
The second new IC, TB67Z800FTG, is a 3-channel half-bridge driver that incorporates six double-diffused MOSFETs (DMOS). It can control a three-phase brushless motor by turning the DMOS on and off with the input signals from an MCU. The device includes shoot through current protection whereby its logic circuit prevents the DMOS being turned to upper and lower levels simultaneously. This capability removes the responsibility from the microcontroller, reducing the load on the MCU.
TB67Z800FTG operates from 4 to 22V and has a maximum output current of 3A. It is supplied in a 5 x 5 x 0.9mm leadless VQFN package enabling it to be mounted on a small cooling fan and features a radiation pad to further enhance cooling.
Both devices incorporate over current detection, thermal shutdown circuitry and an under voltage lockout circuit to improve safety.