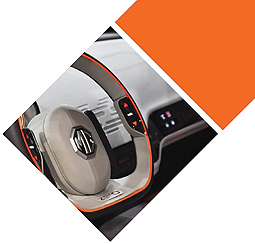 In response to a need for active and predictive safety systems within the automotive sector, semiconductor suppliers are developing innovative radar-based embedded solutions. These next-generation technologies present unique capabilities for designers of Advanced Driver Assistance Systems (ADAS), enabling life-saving safety features as well as compliance with the latest regulatory standards. 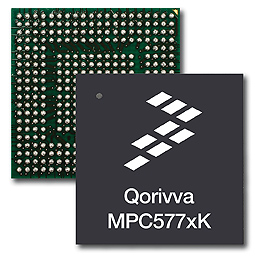 There is a global trend in the increasing numbers of road fatalities. In 2010, 1.24 million people were killed on the world’s roads, the eighth leading cause of death globally (World Health Organization). Within the developed regions, passive car safety systems, seat belts, airbags, and crumple zones have proven essential in decreasing fatalities and serious injuries to the occupants of cars and pedestrians.
Even within the developed regions of the world – where vehicles are becoming more connected and providing an increasing level of information to the vehicle’s operator – analysts recognize driver distraction as a real potential source for fatalities and serious injury. The demand for improving automated safety systems exists and is increasing year-to-year.
While the global automotive industry strives for a goal of zero vehicle-related fatalities, and consumer demand and government legislation drive improved automotive safety standards, the adoption of active and predictive crash avoidance safety systems has become more prevalent in modern vehicles.
Proliferation of Advanced Driver Assistance Systems (ADAS)—such as electronic stability control and rear-view facing cameras, and vision-based pedestrian detection systems—has been possible due to improvements in MCU and sensor technologies. Enhanced radar-based embedded solutions offer complementary safety features to ADAS designers.

Increasing Use of Radar-Based Safety Systems
As more advanced ADAS systems are expected to become government-mandated in the future following the recent introduction of legislation such as rear-view facing cameras in vehicles and advanced emergency brake assist (AEBA) for commercial vehicles, Freescale has developed new products to support these much-needed applications.
Radar-based safety systems manage blind spot and side-impact detection, as well as long-range and mid-range frontal radar for adaptive cruise control. Freescale is the market leader in embedded radar solutions and has a highly skilled design team driving new innovations in embedded MCUs and 77 GHz millimeter wave integrated circuits specifically tailored for radar applications.
A typical radar module consists of a transmit solution (Tx), a voltage-controlled oscillator (VCO), and a three-channel receiver IC (Rx), along with a MCU. The chips are connected via the local oscillator (LO) signal, around 38 GHz. The individual control of each chip is implemented by a serial peripheral interface (SPI) bus. The main controller and modulation master is a single MCU with integrated high-speed analog-to-digital converters (ADCs) and appropriate signal processing capability, such as Fast Fourier Transforms (FFTs). 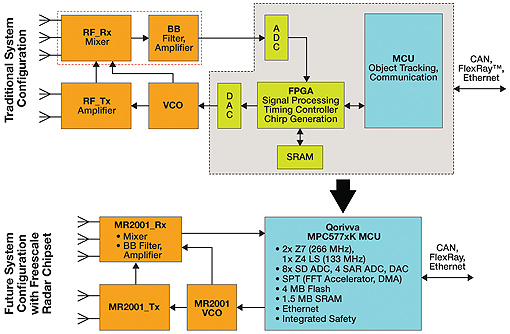 Freescale introduced the next-generation of embedded radar-based products with the Qorivva MPC577xK MCU and the MR2001 77 GHz radar transceiver chipset. The radar transceiver chipset consists of a VCO (MR2001VC), a two-channel Tx transmitter (MR2001TX), and a three-channel Rx receiver (MR2001RX). These new products deliver a complete embedded radar system for automotive designs.
These state-of-the-art radar solutions complement Freescale’s existing arsenal of high-performance ADAS solutions.
For example, Freescale’s embedded camera/video offerings – such as the SCP220x image cognition processor (ICP) family and the Qorivva MPC5604E MCU – are designed for advanced vision processing to address object detection from vehicle to pedestrians. With the release of the new radar-based products, Freescale now offers a comprehensive ADAS solution for automotive manufacturers’ requirements.
This white paper will address the benefits of the MPC577xK MCU from both a technical and bill of materials (BOM) optimization perspective.

: Industry-Leading Integration and Performance
Many current radar systems are based around the Qorivva MPC5675K MCU – , including external FPGA, ADC, DAC, SRAM, and analog front-end for transmitting and receiving. The MPC577xK MCU is specially designed to enable a cost-effective radar system with increased performance in a single chip solution. 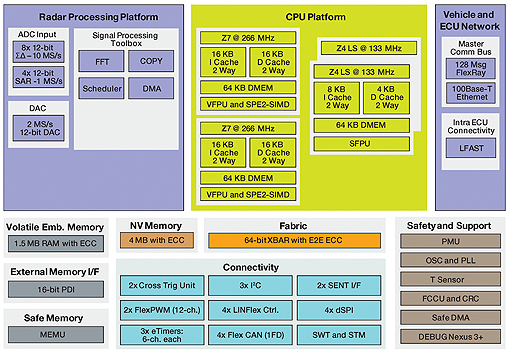 The MPC577xK family attains its cost-advantage by providing high levels of digital and analog integration within a single 356 BGA package and removes the requirement of having an external FPGA, ADC, DAC and SRAM, thereby reducing the number of components required, the PCB size, and the complexity of software (Figure 1).
In addition to the two 266 MHz e200z7 processing cores, the MPC577xK MCU also features a state-of-the-art signal processing toolbox (SPT). This contains the hardware modules required for processing sampled signals from short, medium and long-range radar applications. The SPT is a powerful processing engine containing high-performance signal processing operations driven by a specific instruction set. Its programmability ensures flexibility while removing the CPU from frequent scheduling of hardware operations, while still controlling and interacting with the processing flow.

The MR2001 77 GHz radar transceiver chipset is an expandable, high-performance,
three-package solution for automotive radar modules.
The chipset consists of a VCO, a two-channel Tx transmitter, and a three-channel Rx receiver. These three parts are each packaged in a 6 mm × 6 mm fan-out wafer-level package on a 500 μm pitch. 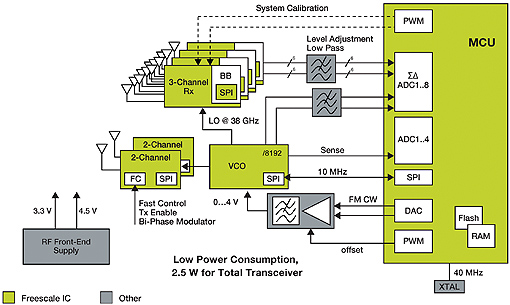 This package technology is ideal for 77GHz radar applications since it provides extremely low insertion loss and parasitics at frequencies up to 100GHz. The packaged chipset simplifies the end user’s assembly of the radar module since there is no need for chip and wire assembly techniques for bare die. Furthermore, the chipset readily scales up to four Tx channels and 12 Rx channels, enabling a single radar platform capable of electronic beam steering across a wide field-of-view and supporting long-, mid-, and short-range radar applications over a full selection of vehicles – from budget to luxury.
▶ Scalable to two Tx channels and 12 Rx channels with simultaneous active channels to enable a single platform capable of electronic beam steering across a wide field-of-view
▶ Advanced packaging technology to ensure the highest performance and minimum signal interference on the customer PCB
▶ Low power consumption – 2.5 W typical for the complete transceiver
▶ Supports fast modulation at 100MHz/100ns
▶ Best phase noise performance < -93 dBc/Hz at 1 MHz, offset to improve target separation ▶ Integrated baseband filter and VGA saves system BOM cost ▶ Local oscillator at 38 GHz to lower the distribution loss and reduce system interference ▶ Bi-phase modulator on the transmitter chip supports rejection of parasitic signals

The MR2001 radar transceiver chipset is designed with advanced packaging technology that delivers excellent thermal and electrical performance. The package is qualified to support rigorous automotive standards including solder joint reliability, deep temperature and humidity cycling, and EMC performance. The packaging technology is available for leading suppliers and is compatible with reduction of hazardous substances (RoHS) standards. 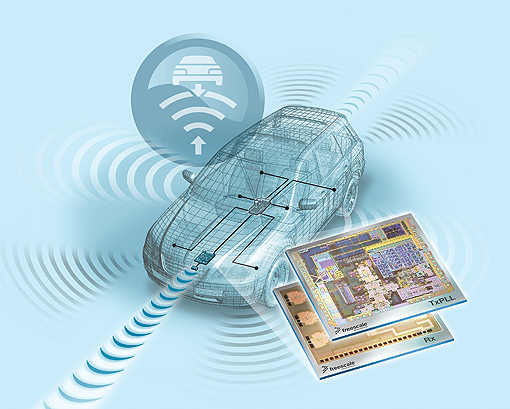 The MPC577xK MCU and the MR2001 77 GHz packaged radar transceiver chipset are designed to support an open-loop radar system. In such systems, a phase-locked loop is not required to generate linear chirps (FMCW modulation). This approach lowers the total system power consumption.
The open-loop concept is typically used in combination with a fast chirp FMCW modulation with a chirp time in the range from 10 μs to 100 μs. Fast chirp systems lower the duty-cycle and improve the SNR of a radar system because a full radar image is captured quicker. The potential disadvantage of high-baseband frequencies is that they drive higher analog bandwidth and sampling rates of the required ADC.
The MPC577xK MCU overcomes this potential problem since it has integrated up to 8 ΣΔ-ADC with 5 MHz bandwidth and an internal sampling clock of 320 MHz.
In an open-loop radar system, the MCU is the chirp master with a digital-to-analog converter (DAC) providing the tuning voltage for the VCO. Depending on the tuning voltage, the VCO generates a high-frequency signal (LO), which then drives the different receiver and transmitter chip.
During normal operation, linear frequency chirps are transmitted and reflected signals are received. The receivers in combination with the transmitter are arranged as homodyne system so that the received signals are down-converted directly into the baseband. Such baseband signals are then filtered and amplified (filters and variable gain amplifiers are implemented in the receiver chips) and differentially feed to the ΣΔ-ADC of the MPC577xK MCU. By converting the baseband signals into the digital domain, following the digital beam forming approach, applying FFTs and tracking algorithms, objects can be identified in terms of distance, velocity, and angular position.

The MPC577xK MCU is suitable for radar applications that may require up to eight antennas each, acquiring up to 2048 possible samples simultaneously, which are then converted by a 12-bit ΣΔ-ADC at a sample rate of up to 10M samples-per-second-per-chirp. This can be achieved through Freescale’s new 8-channel ADC architecture in conjunction with flexible/programmable decimation filtering and inherent anti-alias filtering. It’s also designed with excellent immunity to substrate noise and complete isolation from the rest of the MCU’s peripherals, while still meeting low-power targets designed for low-power applications.
Once a measurement cycle consisting of possibly 256 chirps is acquired, this data is then pre-processed using the on-chip data acquisition block and grouped according to the antennas.
It’s then transferred to the system SRAM using the sample direct memory access (DMA). The data acquisition module receives samples from the SDADC, extracts the samples in the acquisition window.
After all the data for a chirp is acquired, the data is transferred to the SPT’s local SRAM using the programmable DMA engine and frequency transformed using the new embedded FFT engine. The hardware accelerated FFT module can perform complex and real FFTs with a configurable length and can also execute a windowing operation which can be calculated with the data.
The FFT is capable of 16/24-bit integer FFTs of up to 4K points and 2x real by complex. 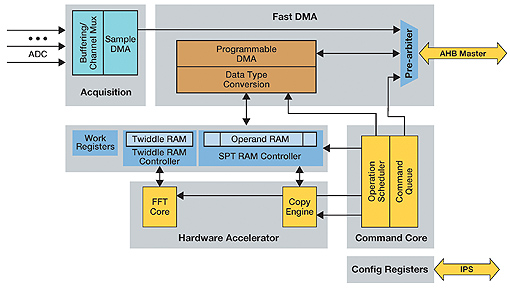 For further signal processing, the data can be transferred to the system SRAM or directly to the CPU tightly coupled memories (TCM) where it can be processed by the e200z7 cores utilizing the SPE2 (a 16-bit four-way SIMD integer unit) or the VFPU (two-way SIMD single-precision FPU).
The command sequencer executes a sequence of commands required for processing the radar data, and in conjunction with the new cross timing engine (CTE), defines the individual timing of signals for the radar system and controls the complete radar processing flow, including the analog front end (AFE). The integration of the new high-performance AFE also includes a new best-in-class 12-bit resolution DAC which has a maximum of 2 Ms/s.
In the radar system, the DAC converts the chirp waveform to an analog signal that controls an external VCO for voltage-to-frequency conversion.
Embedded Radar Components

The SPT (as seen in Figure 3) consists of:

The increasing global need for active and predictive safety systems in mainstream vehicles is driving the need for semiconductor suppliers to deliver new innovations. These solutions must enable system suppliers and OEMS to optimize the bills of materials of current radar systems in terms of not only cost but also footprint. Manufacturers are further incorporating radar for blind spot and side-impact detection, in addition to long-range and mid-range frontal radar.
As a market leader in embedded radar systems, Freescale’s newest radar-based solutions present unique capabilities for designers of next-generation ADAS systems – enabling them to not only comply with the latest regulatory standards, but also (and best of all) save lives ￭