Digital power is becoming an increasingly important technology in our industry. Energy consumption is reaching extremely high levels worldwide and particularly so in Information and Communication Technology (ICT) and in data centers even more so. In addition to which, the increasing complexity of power distribution systems means that the flexibility of digital power can help with the sheer number of different voltage rails required for microprocessors, ASICs, FPGAs and other digital logic.

It was the development of off-the-shelf digital power converter modules that has accelerated the adoption of digital power over the past few years – the trend was kicked off back in 2008 when Ericsson launched the BMR453 intermediate bus converter. It has become readily apparent to those that look that digital control has been particularly successful in improving the efficiency of data network power systems. When data traffic demand is low, networks operate well below capacity and their processors can run at lower clock speeds. Accordingly, this means the power supplies are operating well within their capability, which in effect means they become relatively inefficient and results in excessive energy consumption and waste heat generation. By implementing a digital control loop encompassing both intermediate bus and POL (Point-Of-Load) converters, the intermediate bus voltage can be varied dynamically in response to varying loads. The input voltage to the POL converters is reduced under low-load conditions, which can mean significantly increased conversion efficiency. In addition to which, digital power devices are increasingly employing techniques such as dynamic voltage scaling (DVS) and adaptive voltage scaling (AVS) using open-loop and closed-loop approaches, respectively, to even more closely adapt the supply near to the minimum voltage required by the processor, and in the case of AVS also compensating automatically for temperature variations in the processor. 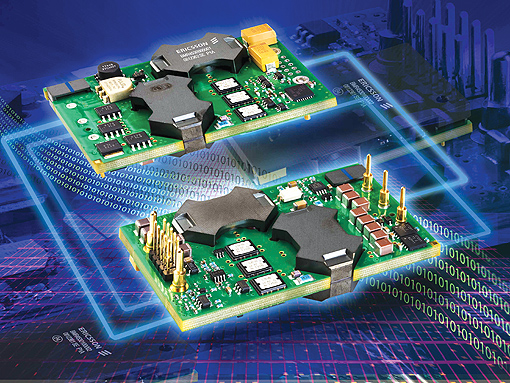 These advanced capabilities have led to the wider adoption of DC/DC power modules, which in turn has meant increasing demands for the standardization of products from different manufacturers, especially for reasons of supply-chain reliability and second sourcing. This has led to the formation of trade associations including power supply and component vendors. However, these alliances have resulted on little more than the specification of standard footprints and pin-outs for certain categories of power converter, such as non-isolated and isolated DC-DC converter modules.

While this has enabled a degree of interchangeability, there has never been consensus on implementation of all of the electrical functions. And this is particularly the case for digital power, which adds another layer of complexity to the challenge of ensuring compatibility between solutions.
On top of which, the development of the PMBus standard, an open standard for communications with a protocol dedicated to power subsystem management, further complicates matters.
However, all of this brings us to the set up last year of the Architects of Modern Power (AMP) Consortium, which makes a significant step in driving forward the adoption of digital power technology. Ericsson Power Modules and its co-founders CUI and Murata of the AMP Group envisage that this initiative will go far beyond the ambitions, and certainly the achievements, of previously established trade associations within the power industry.

The goal of the alliance is to realize the most technically advanced end-to-end solutions and provide a complete ecosystem of hardware, software and support. More specifically, the AMP Group will work on standards for mechanical specifications, monitoring, control and communications functions, as well as the creation of common configuration files that will ensure compatibility between each company’s products.
And in fact, the first standards have already been defined, and announced at Electronica 2014, by the AMP Group for digital POL converters. These new first standards detail mechanical footprints, electrical features and configuration files.
Working together in close cooperation, the three founding companies of the AMP Group can achieve far more than one acting alone: they can pool R&D resources, share a long-term strategic roadmap, and bring to bear high levels of collaborative effort in the development of leading-edge digital power technology.