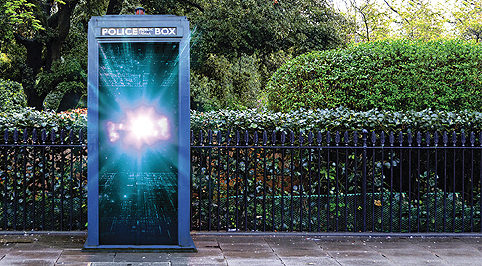 The British sci-fi television show, Dr. Who, used a Tardis to move around space and time. The Tardis looked like a police box on the outside, but the inside was huge with tons of rooms and equipment. How did the Tardis do this? It presumably exploited extra dimensions in space time to step out of our 3D world into new dimensions, providing plenty of room inside the police box and the opportunity to sustain decades of new storylines and a worldwide cult following.

What has this got to do with networking equipment?

The Tardis, while physically a small box, provides a gateway into other dimensions. In a similar fashion, the combination of software-defined networking (SDN) and network function virtualization (NFV) provide mechanisms to extend the processing capabilities of a networking gateway well beyond the capabilities of the processor that is contained in the gateway box. The result is a cyberspace equivalent of a Tardis. This is important because next-generation networking equipment is challenged with both significantly higher bandwidth requirements (Gigabit to the home is a reality in many places now), but also the need for more network service processing such as firewalls, content filters and traffic shaping. These new services can provide more revenue to service providers and value to customers.

How do SDN and NFV allow for this to happen?

SDN and NFV are two different technologies. They are designed to solve different problems in networking, but they are quite complementary when used together.

• SDN separates the control plane and the data plane of networking equipment and allows the control plane to be centralized such that a single controller can manage many data forwarding elements.
• NFV is a technique to implement networking functions as virtual appliances running on general purpose processors.
• SDN deals with the way networks are controlled and managed, while NFV provides a new approach to implementing network functions such as routing, firewalling and even switching.

In traditional networking, customer premise equipment combines a local LAN switch and a routing function. These two functions operate independently – a bridging/switching function to locally switch packets at the Layer 2 level and a routing function to forward the packets to WAN (Wide Area Network) at the Layer 3 level. Network elements’ bridging and routing functions operate based on the Ethernet MAC addresses and IP addresses of the packets. In the SDN paradigm these two separate functions are combined into a single flow forwarding function. Each flow path can be controlled independently with no special considerations to MAC addresses and IP addresses of the packets. Additionally each flow can be programmed with various actions independently. This flow level fine grain granular control is one of the unique properties of SDN. 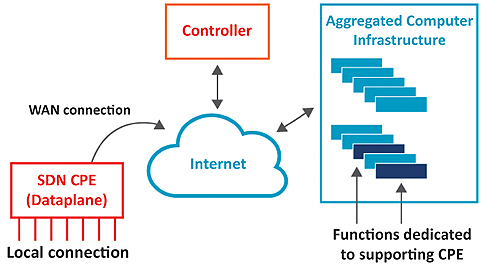 For example, an email flow can be applied with various actions that take the packets across network services such as IPS, firewall, anti-malware and antispam, whereas HTTP flow can be applied with various actions that take the packets through firewall, anti-malware and content filtering. Other examples include applying various QoS parameters based on the application to which the flow belongs to. Essentially, in an SDN paradigm, flow properties and flow paths can be controlled from a different place instead of making local decisions, thereby providing an opportunity to control the customer premise equipment (CPE) devices by service providers remotely.
As discussed above, SDN-based CPE is designed to allow the CPE to be controlled remotely, on a per flow basis. Typically CPEs are implemented using multicore processors and discrete switching and modem ASICs. While the modem functionality will typically remain separate, for many applications the switch and the multicore processor can be integrated onto a single piece of silicon. In fact, because of the performance of multicore processors such as QorIQ platform from Freescale, the SDN flow forwarding function for CPE can be implemented in software for the most common CPE equipment with network uplink connectivity between 100 Mbps and 10 Gbps.
With an SDN-enabled CPE, secure channels can be provided that extend the processing capabilities of the CPE back to the software running on an aggregated network processing infrastructure, thereby enabling the addition of value added network services such as firewalls, deep packet inspection, content filtering, antimalware and more. The key insight is realizing that packet processing associated with a logical piece of network equipment does not need to occur within the single box located at the customer’s premise. Rather, it can be divided between work occurring on the CPE and work occurring in the cloud or PoP (Point of Presence) location. The growth in backhaul bandwidth and low latency networks makes this possible and the SDN and NFV paradigms provide a common scalable approach to providing these new capabilities.
Designers of networking equipment can now open their horizons significantly in terms of how they provide the functions their customers demand. Cloud-based processing can reduce cost and allow all sorts of new services that were inconceivable based on traditional networking technologies.
Like the Tardis on Dr. Who, with its ability to transcend the limits of three dimensional space, the combination of SDN and NFV in next-generation networks provide new mechanisms to enable network services and capabilities that extend and expand well beyond what a traditional gateway box working alone could provide.
Freescale recognized the shift to SDN very early on and has made significant hardware and software investments to support it. Freescale is committed to providing high-performance multicore processors and software solutions required to build SDN-based networking environments. Our product and development teams operate under the fundamental belief that SDN changes the way that processors are designed, enabled and supported and we have placed a strong emphasis on architecting our solutions to to meet the needs of next-generation networks.
Visit www.freescale.com/sdn to learn more. And, check out the new informative video on SDN ( www.youtube.com/watch?v=p-kZ4miDPWU&feature=youtu.be ).

Sam Fuller is the Head of System Solutions for the Digital Networking Group at Freescale Semiconductor. Mr. Fuller has over 20 years of executive leadership experience in computer architecture, SoC architecture, embedded systems and semiconductor marketing and applications, and has led innovative development efforts in SIMD processing, fabric interconnects and symmetric multicore processing. Mr. Fuller holds BSEE and MSEE degrees from Brigham Young University and an MBA degree from the University of Texas at Austin.
www.linkedin.com/in/samuelfuller