Microchip announces the first in a series of modules for the LoRa™ technology low-data-rate wireless networking standard, which 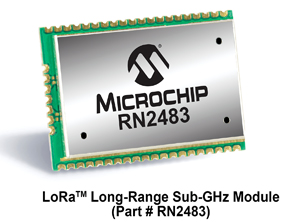 enables Internet of Things (IoT) and Machine-to-Machine (M2M) wireless communication with a range of more than 10 miles (suburban), a battery life of greater than 10 years, and the ability to connect millions of wireless sensor nodes to LoRa technology gateways. The 433/868 MHz RN2483 is a European R&TTE Directive Assessed Radio Module, accelerating development time while reducing development costs.
Additionally, it combines a small module form factor of 17.8 × 26.3 × 3 mm with 14 GPIOs, providing the flexibility to connect and control a large number of sensors and actuators while taking up very little space.
Gartner predicts that there will be 25 billion connected things in use by 2020. While the IoT market is explosively growing, developers are challenged to establish a simple, robust infrastructure with their limited resources. They are demanding a solution that requires a minimum total cost of ownership and is easy to design, with short time to market, great interoperability and nationwide deployment.
The RN2483 comes with the LoRaWAN™ protocol stack, so it can easily connect with the established and rapidly expanding LoRa Alliance infrastructure, including both privately managed local area networks (LANs) and telecom-operated public networks, to create Low Power Wide Area Networks (LPWANs) with nationwide coverage. This stack integration also enables the module to be used with any microcontroller that has a UART interface, including hundreds of Microchip’s PIC® MCUs. Additionally, the RN2483 features Microchip’s simple ASCII command interface for easy configuration and control.
LoRa technology has several advantages over other wireless systems. It utilises a spread-spectrum base modulation that is capable of demodulation with a 20 dB below noise level. This enables high sensitivity with robust network links, improves network efficiency and eliminates interference. The LoRaWAN protocol’s star topology eliminates synchronisation overhead and hops, compared to mesh networks, which reduces power consumption and enables multiple concurrent applications to run on the network. LoRa technology also has a much longer range than other wireless protocols, which enables the RN2483 to operate without repeaters, reducing the total cost of ownership. In comparison to 3G and 4G cellular networks, LoRa technology is far more scalable and cost effective for embedded applications. The RN2483 module resolves the age-old wireless developer’s dilemma, where they had to choose between longer range and lower power consumption. By employing LoRa technology, designers can now maximise both while reducing the cost of additional repeaters. Additionally, the RN2483 provides them with the ability to secure their network communication using AES-128 encryption.
With its scalability, robust communication, mobility and the ability to operate in harsh outdoor environments, the RN2483 is well suited for a broad range of low-data-rate wireless monitoring and control designs. Example IoT and M2M applications include: Smart Cities, such as street lights, parking and traffic sensors; Energy Measurement smart meters for electricity, water and gas; and Industrial/Commercial/Home Automation applications such as HVAC controls, smart appliances, security systems and lighting.
Samples of the RN2483 are available now and it is expected to be widely available for purchase in May.