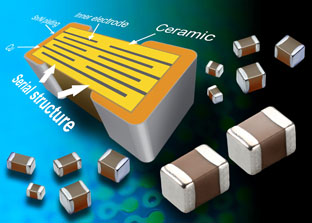 Murata has introduced 13 new parts into its GCD series of MLSCs (multilayer series capacitors). This range features two capacitors in series in each package and is designed to reduce failure of electronic equipment caused by excessive bending and solder shock cracks in automotive environments.
In a multilayer series capacitor (MLSC), there are two capacitors in series in each package. In harsh environments such as automotive electronics, capacitors mounted on a PCB are often subjected to strong bending forces which cause cracks in the part. Typically the cracks occur across the corners of the capacitor which are in contact with the solder. In an MLSC, such a crack would not cause failure of the part, but would disable only one of the capacitors in the package, leaving the other one intact and functioning. After one side of the part has been cracked, the mechanical stress on the part is mitigated and it’s unlikely that a similar crack will affect the other capacitor. The structure of MLSCs therefore vastly improves reliability of these parts – the series is designed to keep its rated voltage despite any cracks, in order to meet the needs of demanding applications such as battery lines.
Murata has added 13 new parts to the GCD series, seven in 0603 packages and six in 0805 packages. 0603 size capacitors have dimensions of 1.6 by 0.8 by 0.8mm and are now available with capacitances of 5600pF, 6800pF, 8200pF, 10nF, 12nF, 15nF and 22nF. 0805 size capacitors measure 2.0 by 1.25 by 1.25mm and are now available with capacitances of 15nF, 22nF, 47nF, 56nF, 68nF and 100nF. All parts are rated to 50V. Further parts in the GCD series are already available with various capacitances in 0603 and 0805 sizes.
www.murata.eu