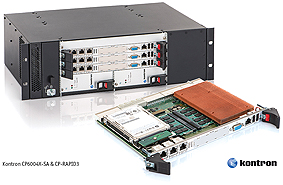 As part of its ‘High-Speed CompactPCI® Initiative’, Kontron is launching the world’s first 6U CompactPCI® Serial Mesh 10 Gigabit Ethernet processor board together with a compliant chassis at the Embedded World 2013 trade show (hall 1, stand 460). For the first time, a CompactPCI® system supports 10 Gigabit Ethernet and PCIe over backplane in addition to the common interfaces such as PICMG® 2.16, SATA and HDMI. The Kontron CompactPCI® processor board CP6004X-SA is based on the latest generation Quad-Core Intel® Core™ processor and offers high computing power and performance-per-watt, which really comes into its own in the CP-RAPID3 chassis with full-mesh fabric configuration.
Some applications for the new modular CompactPCI® Serial Mesh (based on PCIMG® 2.20) systems are in high availability telecommunications and datacommunications systems for carriers and also with government and security companies. Applications include secure wireless systems, radar and sonar applications, and complex computational algorithms such as imaging processing. Now, even with smaller space requirements, existing system installations are provided with a significant increase in data throughput when new long-term generation systems are being developed which, in the future, could be scaled up to 40 GbE. Multiprocessor board configurations have already been fully tested in the chassis so that pre-integrated modular CompactPCI® system configurations with 10 Gigabit Ethernet and PCIe over backplane can be supplied to OEMs immediately.