Getting the maximum lifetime out of a battery requires an understanding of three key factors: battery technologies, digital power management and low-power analogue techniques. Whilst most designers are familiar with the strengths and weaknesses of different battery chemistries and with digital power control, they may be less familiar with the role that low-power analogue can play in pushing extending life.

One of the key decisions for designers of portable electronics is the choice of battery technology. The four main battery chemistries are Alkaline, Nickel Cadmium (NiCd), Nickel Metal Hydride (NiMH) and Lithium Ion (Li-Ion) and each has its own advantages and drawbacks.
Typically, a fully-charged Alkaline cell will produce a voltage of around 1.5V. This voltage will decrease as the battery’s energy is used, so that at 90% usage the voltage will have fallen to around 0.9V. The combination of a relatively high capacity and a high internal resistance, makes Alkaline batteries inefficient for high current-drain applications such as remote-control cars, camera flash units and power tools. 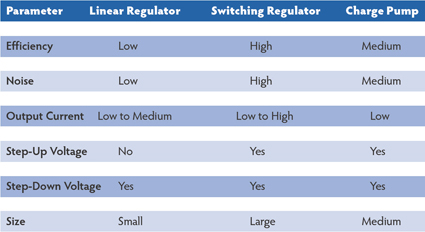 For these high-current applications, NiCd battery cells provide a very durable and low-cost option, offering a nominal voltage of 1.2V which drops to around 0.9V at the end of the battery life. The drawbacks are their relatively low energy density and the presence of toxic metals, In addition, a periodic full discharge is necessary to prevent large crystals forming on the cell plates and affecting both battery life and performance.
In contrast, NiMH cells are more environmentally-friendly and deliver around 40% more energy density than NiCd battery cells. Their nominal voltage of around 1.25V will drop to below 1.0V at the end of battery life. The disadvantages of NiMH batteries are a considerably higher rate of self-discharge and a lack of durability, compared to NiCd, caused by cycling under heavy loads and extremes of temperature.
For most portable consumer electronics, Li-Ion is now the dominant battery chemistry. A fully-charged single Li-Ion cell has an open-circuit voltage of around 3.6V, decreasing to around 2.7V when fully depleted. The advantages of using Li-Ion cells include a lighter weight, higher cell voltages and, with Li-Polymer versions, the ability to be shaped. Additional advantages are that the energy density of Li-Ion and Li-Polymer batteries continues to increase and is currently about twice the cell energy of a standard NiCd, whilst their costs decrease. The main disadvantage of this chemistry is the risk that they may explode if overcharged. This valid safety concern means that some manufacturers are opting for NiMH chemistries, particularly where size and weight are not critical factors.

An understanding of DC-to-DC converter architectures is essential for optimising the overall performance of a design and, typically, the choice will be between linear regulators, switching regulators and charge pumps.
Although there are several types of linear regulator, the most common used in battery-powered applications is the low dropout regulator (LDO). These use a P-channel pass transistor as a variable resistor with feedback to regulate a given output voltage.
In comparison, a switching regulator uses a diode, an inductor and a switch to transfer energy from the input and provide a given output which is configured in either a buck, boost or buck/boost topology. A buck regulator provides a regulated output voltage that is lower than the input voltage, which is similar to the function of an LDO; a boost switching regulator provides an output voltage which is higher than the input; whilst a buck/boost regulator delivers a regulated output across a range of input voltages that are above and/or below that of the output.
The third type of regulator, a charge pump, uses a capacitor as an energy-storage device and has switches to connect the plates of the capacitor to the input voltage. Depending on the circuit topology, a charge pump can double, triple, invert, halve or even create an arbitrary regulated output voltage.
The use of charge and discharge capacitors to transfer energy means that a charge pump provides a relatively low output current of no more than a couple of hundred milliAmps.
Table 1 outlines the advantages and disadvantages of each of these DC-to-DC converter topologies and the choice of optimum topology will depend on the parameters of each application. For applications in which a long battery life is the priority, a highly efficient switching regulator may be the best choice; whereas, in applications with a high level of electrical noise, the choice would typically be a linear regulator. However, every application will need to focus on power-management circuitry if system performance targets are to be achieved.

Figure 1: Placement of input and output capacitors for a Switching Regulator.

DC-to-DC conversion offers a number of techniques for extending battery run time. Figure 1, for example, shows the placement of an input and output capacitor, in relation to the DC-to-DC converter. In this configuration, the switching regulator used to open and close an input switch can cause current surges on the input pin which can be minimised by using a large input capacitor as a charge buffer. This can affect battery run time because, depending on the battery chemistry, the internal resistance may become significant and pulsing current from the battery can cause an appreciable voltage drop across the battery cell. A larger input capacitor, placed between the battery and the switcher, will reduce the instantaneous current draw and resulting voltage drop across the battery. By minimising these voltage drops, the run time of the battery can be extended before the minimum battery cell voltage is reached.
In low-power applications which spend a significant time in standby or sleep mode it may not be necessary for the regulator to be running at all times. Here, the use of a larger output capacitor to supply the low current required by the load can be more energy-efficient. Cycling the regulator, on and off, boosts the capacitor charge as it is required.

Dynamic voltage scaling is another common technique for maximising battery run time. When operated at a lower voltage a digital load, such as a microcontroller, requires less current and therefore consumes less power. The drawback, however, is that operating a microcontroller at a low voltage can limit its processing speed and output capabilities. Dynamic voltage scaling enables the microcontroller to combine lower voltage and lower power consumption, when in standby or sleep mode, with a boost to a higher voltage level for processing or transferring information. This technique is used extensively in computing and many other battery-powered applications in which the microcontroller operates in different modes.
The amount of run-time versus standby or sleep for each application will also influence battery run-time. Whilst applications such as carbon dioxide detectors typically need to use continuous operation, others can remain in standby or sleep mode until required. Examples of applications with intermittent operation include smart water meters, remote controls and photo-based smoke detectors.

There are vast online resources dedicated to helping designers to understand and manage digital power by using the different modes of operation offered by microcontrollers and also by turning its on-board peripherals on and off as required.
The impact of running the microcontroller in a continuously active state, or putting it into sleep mode and then waking it for active operation, is also well documented.
When managing the power budget for analogue components, the choices may not be as clear.
Whilst it is still critical to use analogue ICs with the lowest active current for systems that use continuously active operation, applications which are duty cycled, will also need to consider the settling time in relation to the current consumption. It may be that a higher-current, faster device may provide greater long-term efficiency than a lower current alternative with a slower response time.
Choosing the right battery technology and digital power management techniques are familiar considerations for designers looking to extend battery run time. The implementation of low-power analogue techniques is often less familiar but can play a significant role in extending battery life and ensuring optimum system performance.