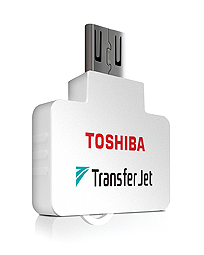 has announced that it will soon be introducing technology that enables consumers to transfer a music track or high-resolution image wirelessly between devices in the blink of an eye. TEE will launch its family of TransferJetTM USB adaptors for tablets, mobile phones and PCs in Europe during the fourth quarter of 2014.
TransferJet is a close proximity, wireless transfer technology that features simple operation, safe connection and very high data throughput. Touching two devices together automatically initiates data transfer; users can specify and restrict which devices can connect. With a maximum effective data transfer speed of 375Mbps (Megabits per second), TransferJet makes it possible to move a 20 second full HD video from one device to another in one second.
The first TransferJet adaptors will be supplied in microUSB format for mobile phones and tablets based on Android OS, and USB format for PCs running Microsoft Windows. They will initially be available through retail channels in Central Europe. The manufacturer’s suggested retail price of a set of two USB dongles will be 59 Euro (approximately £47).
To enhance the promotion and commercial availability of TransferJet adaptor products in Europe, Toshiba will expand its partnerships within the market.
Further announcements relating to partners launching devices utilizing Toshiba TransferJet technology are expected within the fourth quarter of 2014 and first quarter of 2015.