The fundamental components of the Internet of Things 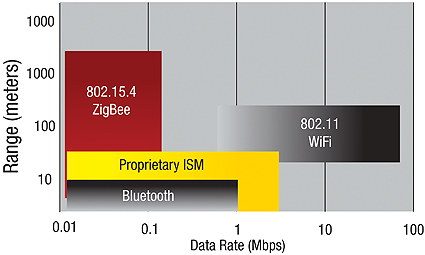 The focus of the internet is set to change over the next five years as systems become smarter. According to networking specialist Cisco, 50 billion devices are likely to be connected to the internet by 2020, helping to sustain a $14tr market. The systems that dominate the internet today, such as PCs, laptops, tablets and smartphones, will be dwarfed by the tens of billions of machines with network connections that will relay data to each other with the aim of making life more efficient.
The idea of the internet of things (IoT) dates back to the late 1990s when researchers proposed ideas such as ambient intelligence, in which a forest of smart sensors would monitor environmental conditions, alerting control systems to changes. By enacting changes in response, these control systems can improve efficiency in a wide range of systems, from industrial control through home automation to healthcare. For example, a set of smart sensors dotted around the body, can pick up on health problems that alert the user to a problem through their phone.

In industrial control, a series of sensors mounted along a production line can detect conditions that may lead to problems such as sudden changes in temperature or excess vibration that may signal a problem in a machine tool or a process going outside its bounds.
There are three fundamental components that combine to form an IoT node: intelligence, sensing, and wireless communications. Wireless connectivity is vital because it will allow sensor nodes to be deployed quickly and easily without the requirement to route network cables to each location.
In order to survive for long periods of time on a single battery charge, an IoT node needs to exhibit low power consumption. Typically, the node will be dormant for long periods of time, waking up for short periods to take a reading and then make a decision on whether to send out an alert based on the change or go back to sleep. A large number of microcontrollers are designed around this core requirement, sporting ultralow-energy sleep modes combined with high-performance instruction pipelines to streamline processing while awake.
A key decision is the type of architecture. A growing number of low-cost microcontrollers from vendors such as Atmel, Freescale, STMicroelectronics and Texas Instruments use 32-bit cores based on architectures such as ARM to deliver high performance at low power and access to a growing range of open-source software that allows applications to be built quickly. However, architectures such as Atmel’s AVR demonstrate that the 8-bit platform still provides a great deal of power, using advanced smart peripherals to collect data from sensor interfaces, and delivering high cost-effectiveness.
There are a number of possible approaches for introducing low-power communications to an IoT node, ranging from purpose-designed protocols such as Zigbee to low-power variants of Bluetooth and Wi-Fi. Some of these protocols offer direct compatibility with the internet protocol (IP). Others rely on a gateway to map between IP packets and the leaner protocols used by the IoT sensor nodes.

Zigbee is a low-power wireless network specification based on the IEEE 802.15.4 (2003) standard that was developed by a group of 16 companies involved in industrial and building automation. A novel aspect of Zigbee compared to many other networking protocols lies in its use of mesh networking. This allows IoT nodes far away from a central controller to use nodes in between to carry their communications. This not only extends the range of a central gateway, it also increases robustness as a transmission can use a number of different routes through the mesh.

Originally launched by Nokia as Wibree in 2006, Bluetooth Low-Energy (BLE) or Bluetooth Smart provides a similar range to classic Bluetooth but with reduced power consumption. In place of the 1MHz channels used by the original Bluetooth protocol, BLE uses a smaller set of wider-bandwidth channels of 2MHz but with a lower peak data rate.
The channel bandwidth is similar to that of Zigbee but with narrower spacing.
A key advantage of BLE is its lower latency, just 3ms versus the 100ms of classic Bluetooth, as well as lower complexity so that its software stack can easily be incorporated into lower-cost microcontrollers. BLE retains support for frequency hopping from the original Bluetooth protocol, which makes it more robust than Zigbee in the presence of strong interfering signals.

One of the main application areas for BLE is medical instrumentation, where a number of on-body sensors to monitor heart rate, blood pressure, and posture relay their readings at regular intervals to a central controller, which may be a mobile phone or a dedicated medical instrument.
Having been in use in various forms for more than 15 years, Wi-Fi has the benefit of being the most mature wireless-networking radio technology suitable for IoT applications. Through protocols such as WPS, Wi-Fi can offer easy integration into an existing network for devices that have little to no physical user interface.
Of the wireless technologies suitable for IoT applications, Wi-Fi has the best power-per-bit transmission efficiency. Conventional Wi-Fi designs tend to use more energy to maintain a connection while quiescent than protocols such as BLE, which can decrease energy efficiency if the application does not need high bandwidth. However, vendors such as GainSpan have worked on power efficiency in designs such as the GS2000, which combines support for both ZigBee and Wi-Fi on the 2.4Ghz and 5GHz band. These designs put the radio into an energy-saving standby mode if the sensor node does not need to transmit any data. It wakes up only to send data or keep-alive connection packets used to assure central controllers that the node has not failed.
In general, Wi-Fi tends to suit applications where compliance with the IP stack is an advantage, there is a requirement to deliver large amounts of data, such as audio or video, or the remote devices can be powered by external energy sources.

An example of Wi-Fi in use is by Mernok Elektronik of South Africa, which used modules from connectBlue to incorporate wireless networking into the locomotive control and safety management systems of railway systems used in mining.
The modules are used to collect real-time operation data on each vehicle and provide a robust wireless connection across both 2.4GHz and 5GHz frequency bands with support for over-the-air firmware updates and parameter changes.

BLE and Wi-Fi can be used together efficiently as they both support coexistence protocols designed to reduce interference between the two on their common frequency band of 2.4GHz. This coexistence ability lends itself to implementation in gateway designs where BLE is used for connections to sensor nodes and Wi-Fi for relaying aggregated data to a backbone network.
The APx4 from Bluegiga provides an off-the-shelf solution for this, providing support for both Wi-Fi and the full Bluetooth 4.0 software stack that includes BLE, based around a powerful 450MHz ARM9 processor.
A number of integrated microcontrollers and support chipsets from vendors such as Atmel, CSR, Freescale, STMicroelectronics and Texas Instruments provide support for protocols such as BLE, Wi-Fi and ZigBee. For implementations that need flexibility, the configurable radio transceivers made by Lime Microsystems make it easier to deploy nodes that can be programmed with a specific RF interface personality at the point of manufacture to suit different networking needs in the target system.
As the IoT scales up, we can expect more integrated solutions to arrive on the market. But, even at this early stage of development, there are many choices available to the engineer with which to incorporate the three key components of IoT support.