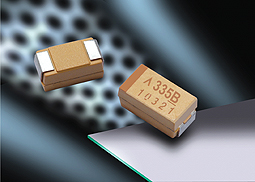 The tantalum capacitor is a product present in the electronics industry for over 30 years. It is often used in power systems as a filtering element, eliminating pulsating voltage. Its advantages compared to the other parameters of electrolytic or ceramic capacitors are known since long. The major advantages include:
• stability of parameters over time;
• good capacity-to-size ratio;
• good electrical parameters.

Due to constant technological development, the requirements in relation to the parameters of discrete components, particularly for capacitors, are still growing. The continuing miniaturization and digitization of equipment imposes stringent requirements, especially for electrical parameters on these components. The capacitors must now often operate at very high pulse currents.
Colloquially, tantalum capacitors are understood as capacitors with one electrode usually made from powdered, sintered tantalum. On this electrode, a dielectric film – insulating material – tantalum pentoxide (Ta2O5) is formed. The second electrode is manganese dioxide (MnO2) as solid filling of the porous surface of dielectric material.
A key element negatively affecting the performance of this capacitor is the material constituting the second electrode. Unfortunately, it is necessary to use a substance that fills the porous surface of the dielectric material. So far, the best compromise was to use just MnO2.

Figure1: Structure of a tantalum capacitor.

In AVX TJC series capacitors, this electrode has been replaced with a new material – an organic conductive polymer instead of manganese dioxide as cathode. This significantly improved primarily so-called Equivalent Series Resistance – ESR – one of the key parameters defining the behaviour of a capacitor in electrical circuits.
Please note that a real capacitor is an appropriate combination of three elements:
– an ideal capacitor;
– an ideal resistor;
– an ideal coil.
Both the resistance and inductance are the parasitic and undesirable components that negatively influence the current response of the capacitor in electrical circuits. 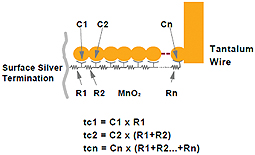 Undesirable series resistance of tantalum capacitors is introduced primarily by poor conductivity of MnO2, the material, from which one of capacitor electrodes (negative – cathode) is made.
In the tantalum capacitor model, the placement of the resistance created by the cathode can be seen (Figure 2).
In total, an RC ladder is formed, in which individual resistors reflect electrode resistance that grows with the depth of the electrode and capacitors reflect parallel capacitance elements formed on the porous surface of the dielectric material.
The result is that with increasing frequency, the current flows mainly through the capacitors directly on the component surface of the anode (silver). Capacitors that are located deeper, closer to the dielectric material and away from the anode, are powered by the sum of the series resistors. Then they have a marginal effect on the overall response of the capacitor element.
Use of a polymer significantly reduced series resistance value which was present in a previous generation of capacitors due to the relatively low conductivity of MnO2. This also reduced the change in capacitance as a function of frequency changes. The capacitance of such capacitors remains constant for much longer and does not drop as fast as in its predecessors with increasing frequency of the electric current.
In average, a capacitor with MnO2 electrode “loses” about 50% of its capacity at 100 kHz frequency. In case of a polymer electrode, the capacitor retains more than 90% of its capacity at this frequency.
Additionally, the use of a polymer electrode eliminated the risk of so-called ignition failures – strong thermal reactions that lead to component damage, resulting in higher stability and durability of these capacitors. In both technologies, there is also the phenomenon of so-called Self-Healing – elimination of points of substantial flow of electric current due to impurities in the structure of the dielectric material. 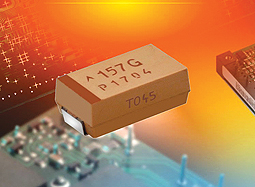 With all of these advantages, please also note that those capacitors are more sensitive to high temperatures – above 105°C (resistance of the conductive polymer increases with the temperature increasing) and that they have a higher leakage current than their predecessors.
Former capacitors with polymer electrode also did not have such high rated voltages as TCJ series component currently manufactured by AVX. It is recommended only to reduce the operating voltage by approximately 20% of rated voltage in order to prevent a possible voltage jump above a safe level.
The tantalum capacitors with polymer electrode are worthy successors of the previous MnO2 technology of electrodes. In these components, it was possible to significantly reduce the ESR value, to eliminate the phenomenon of capacity decrease with increasing frequency and there is no problem of thermal damage due to ignition failures.
Target applications of such capacitors include power supply units, LCD monitors, tablets, smartphones or notebooks.
The offer of TME includes SMD tantalum capacitors from AVX Company with polymer electrode in the range of capacities from 0.47 to 220 uF and voltage range from 2.5V to 75V. Please contact our sales department who will assist you in the selection of appropriate components.