Many modern electronic systems rely on accurate timing in applications such as telecommunications base stations (both fixed as well as mobile) and ground based and airborne based radar stations. Such applications require not only highly stable frequencies but also a very low phase noise performance.

The definition of stability is fairly self-explanatory being the shift of frequency over the operating temperature range. For example ±50ppm over -40 to +85C in the case of a clock oscillator or ±50ppb in the case of an OCXO (Oven Controlled Crystal Oscillator). The phase noise performance (from which the jitter performance can be defined) is the short term variation or fluctuation of the oscillator frequency within the frequency domain. (See figure 1) 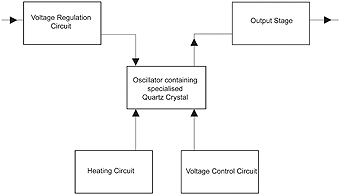 We shall therefore look at each of these blocks in sequence and give some idea of their effect on the phase noise performance of the oscillator. As is to be expected the most important component within the OCXO is of course the crystal.
Generally speaking, the crystal has the most effect close into the carrier that is up to an offset of 10kHz. To take as an example IQD’s recently released IQOV-200F series (see figure 3) of OCXO this has typical phase noise figures at a nominal operating frequency of 100MHz of -95dBc/Hz at 10Hz offset, -130dBc/Hz at 100Hz and -175dBc/Hz at 10kHz offset. These figures are achieved by the use of a 5th Overtone 100MHz crystal housed in a HC43 style holder. As is now usual in very high specification oscillators an SC-cut crystal (stress compensated) is used with a turnover temperature of around 87 degrees C. Normally the crystal will be held under vacuum which has the effect of improving the long term ageing performance of the unit, and as we shall see later on in this article the exact turnover temperature of each individual crystal is catered for at the alignment stage. It should be noted that by their very nature SC-cut crystals are relatively thin in profile (only a few microns) and therefore need very careful handling prior to being encapsulated since they are very easy to break.
The method of mounting the crystal within the enclosure also needs to be considered by the manufacturer since its mechanical movement can also have an adverse effect on phase noise performance. Do you for example choose a two point mount or a four point? Do you use a flexible or a non-flexible adhesive to hold the crystal in place? These are all things that the manufacturer needs to consider and most often need to be thought about whilst taking into consideration the customer’s application. 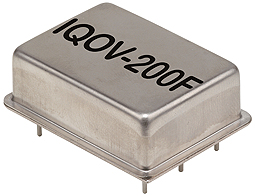 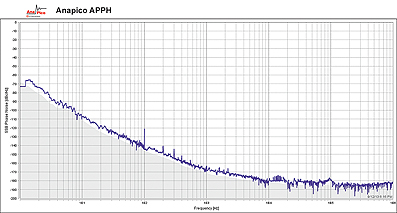 Finally, consideration should be given to the insulation used within the enclosure although as with the crystal element, the device itself is backfilled with dry nitrogen during hermetically sealing it does appear that the use of an internal insulation blanket can have a positive influence on improving the phase noise performance of the oscillator, although there is a lot more investigative work to be carried out in order to confirm this!
As can be appreciated the design of a high end OCXO is very involved and consideration has to be given to many factors, all of which are interlinked when it comes to looking to achieve the minimum possible levels of phase noise from the oscillator. The end result of course, represents many years of research and development into achieving the best possible performance in order to meet with the customer’s requirement.