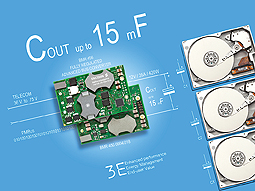 Ericsson has launched the industry’s first digitally controlled Advanced Bus Converter specifically aimed at powering Redundant Array of Independent Disks (RAID) and Network Attached Storage (NAS) hard-disk applications that operate with high capacitive loads up to 15 millifarads (mF). Based on the Ericsson 3E* FRIDA II platform, the BMR456 ‘High-Cap’ series (BMR4560004/018) guarantees stable and accurate 12V bus voltage over the full input-voltage range.
RAID and NAS applications developed for datacenters are designed for high performance and reliability and require very stable and smooth bus voltages without disturbances, such as voltage glitches or delays that result from power sources operating with current-mode limitations. Designers will commonly use large arrays of capacitors, often resulting in an average value of 12 to 15 mF, to secure that the bus voltages delivered to hard disks and other sub-assemblies are exempt from noise. Developing these types of products can be a significant challenge, but the BMR456 ‘High-Cap’ converter makes full use of the flexibility offered by digital control in addition to its Ericsson Energy and Performance Optimizer firmware, and embeds a voltage-mode-control algorithm that maintains a tight output voltage between 11.88V and 12.12V and accurately controls the 20 millisecond ramp-up time.
Designed for 12V bus applications that might only require 6V in standby mode, controlled via PMBus commands, the output voltage of the BMR4560004/018 can also be adjusted to as little as 4V, even powering 5V board-level subsystems in idle mode, delivering significant headroom to board designers.