To meet the European CO2 – emission guidelines, the car manufacturers have investigated all systems with respect to their energy efficiency. Even the smallest load can become a factor in deciding whether a tax of EUR 95 per 1g CO2/km has to be paid or not. Control units not required constantly are now – just like in mobile phones – intended to be put into current saving mode. Two competing network standards are vying for the developer’s attention namely the Pretended Network and the Partial Network. This article analyses each standard in terms of its respective advantages and disadvantages and offers solution approaches. 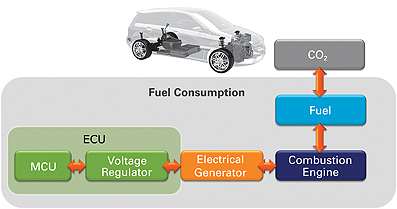 Since 2012 everybody is talking about the European CO2 tax for cars. Every car manufacturer selling cars in the EU whose CO2 emission exceeds the regulation limits must pay penalty taxes. The intention behind this is make the industry and the consumers aware of the costs of climate changes and environmental damages caused by the CO2 emissions through a clear price adder.
The CO2 tax is being discussed in public controversially. Heated debates have ensued over the CO2 tax amount, its effectiveness, or the question whether CO2 tax is justified at all.
Actually, the CO2 tax has triggered a long due discussion over a problem, that is, to face the issues of limited resources and climate changes. Besides the emotional debate though, work is long under way to resolve the problems. The car manufacturers have analysed their car models and evaluated potential improvements already before 2012. In each construction segment like combustion engine, air drag, road resistance right up to electrical loads, potential improvements and corresponding costs have been calculated. From this point of view, the CO2 tax motivates innovation for economical processes and efficient use of energy.

This article deals with the role of electronic control units which, assisted by the microcontrollers contribute significantly towards reduction of energy consumption in cars. In a typical premium vehicle up to 100 control units – interconnected in a network – are used to help increase the efficiency.
Some of which are active even when a car is parked (e.g. door control and anti-theft protection). In order to assess the increase in efficiency in this segment, the complete chain of factors impacting the efficiency must be reviewed (refer to figure 1).
One of the biggest loads in a control unit is the microcontroller which is powered by a voltage regulator. The voltage regulator in the control unit is powered by the dynamo, which in turn is driven by the combustion engine. This consumes fuel, exhausting thereby CO2. Therefore, the more current a microcontroller requires, the more fuel is consumed and consequently the vehicle exhausts more CO2.
A premium model with 100 control units has up to now been emitting up to 5g CO2/km purely due to the current consumption of the control electronic, NB without a single other electrical load e.g. the headlights or air conditioner ventilator being on. The CO2 tax envisages levying EUR 95 tax per 1g CO2/km per car if weight specific CO2 emission limit is exceeded. Thus, for an emission of 5g CO2/km, a car manufacturer would therefore have to pay up to EUR 475 CO2 tax.
Such assessments have increased awareness even for the smallest energy load. The development departments have been urged to put the control units in the current saving mode as often as possible or even to shut down completely. This idea has been copied from laptops and mobile phones where the displays are switched off and the CPU frequency is reduced if it is idle. Of course, the reduced current consumption is also always coupled with a reduced functionality and additionally the ramp-up time till full functionality is available again is long – just like in case of laptops. Whereas a trailer-light control unit can be switched off completely without any loss of comfort if no trailer is attached to the car; the situation is different though in case of an air conditioner ventilator. Therefore, the engineers must consider and control precisely as to when a control unit is not required in order to save energy at the expense its functionality.

Since in modern cars all control units communicate with each other via a network, the car manufacturers have created standards which define how much and at which point in time control unit current can be saved. One such Software-Standard-Platform is for example the AUTOSAR. Both approaches, namely the “Partial Network” and the “Pretended Network” were defined here.
Common to both approaches is that 2 current saving levels each have been specified. In Pretended Network the “Level 1” and “Level 2”; in Partial Network the “Standby” and “Sleep”. The higher the current reduction, the longer is the “wake-up” time of a control unit till it regains the full functionality (refer to figure 2).
Pretended Network
The Pretended Network follows the so-called Best Practice approach; the currents here – compared to the Partial Network – are even under extremely reduced use of resources very low, presently below 7mA (future target – below 2mA). The lower limit of the current is determined by the presently used standard transceiver which, with its 5mA has the largest share in the total standby current. Especially the volume producers appreciate the advantage that the new Pretended Network control units can operate together with the older units in the same network. This reduces the development risk considerably and also allows continual introduction of this technology within the next generation model. The wake-up time is considerably shorter than in Partial Network because the microcontroller is never fully powered off and the modern current saving modes of microcontroller can be utilized optimally.

Partial Network is the more radical of the two and is also a more expensive approach. A new type of intelligent network transceiver controls the whole control unit. Hereby, standby currents below 0.5 mA are feasible, but it is not a low cost solution. A complete implementation of this standard requires that all control units of a network must be equipped with the intelligent network-transceivers. Another disadvantage besides the additional costs is that the control unit wake-up time out of the maximum current saving mode is relatively long. This is because for the microcontroller it is almost like a cold-start process which can take up to 10 times as long as a warm-start.

Every car manufacturer must ask himself the question: Revolution or evolution – Partial Network or the Pretended Network – or in other words – how much money and efforts one has to spend to achieve the respective CO2 reduction goal.
Thus, the question to be answered is – wouldn’t the resources for an expensive network transceiver, additional efforts needed for converting the software of all network control units, and having to live with the slow reaction of the control unit in the maximum current saving mode – be better spent for something different?

In parallel to the relatively recent debate over current saving due to European CO2 tax, Renesas has developed multiple technologies which reduce the current consumption of microcontrollers.
All in all 5 different solution approaches have been realised thereby:

The first two of these technologies would be reviewed more closely here for implementation in the “Partial Network” or the “Pretended Network”.

Renesas has achieved a great success in its current 40 nm technology development for automotive microcontrollers with internal Flash.
Renesas developed indigenous transistor technology for its 32-bit microcontrollers, increasing performance while reducing the current consumption by 50% at the same time. This reduces the current consumption in operation mode itself by half, without one having to consider any functional limitation of the control units. This implies an efficiency growth by a factor of 2, a feat which only a few automotive construction segments might be able to duplicate. 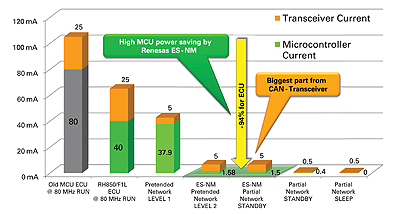 Renesas did this by optimising the smallest unit of a microcontroller – the transistor. The total current consumption of a transistor is the sum of its dynamic and the static currents: The static currents are determined by leakage currents which flow as soon as power is applied to the transistor.
The dynamic current flows during switching of transistors, that is, when it changes its logical state (1 or 0).
These currents are determined by the internal capacities of the transistors.
Renesas has succeeded in reducing both by modifying the physical structure of the transistor. The internal transistor capacity was reduced by alteration of the oxide material, and by adapting the transistor geometry, the leakage current could be reduced by a factor of 10. These changes also resulted in higher operating frequencies.

In addition, Renesas has optimised the microcontroller digital structure in such a way that maximum current saving modes can be utilised (refer to figure 3), while at the same time the microcontroller can still react to external signals. This is totally taken care of by intelligent IPs (Peripherals) without any CPU interaction. Although in STOP mode the CPU is sleeping, the CAN-IP can participate in the network communication by itself in this configuration. The integrated intelligent message filters wake-up the CPU when a dedicated message type – which is configurable – is detected. Since here the microcontroller is only in STOP mode, it is only a matter of microseconds to execute a warm-start. After wake-up, the CPU can retrieve the message detected by the filter from the CAN-IP and process it.
This configuration is optimal for realising the “Pretended Network Level 2”: Renesas has tested this configuration in a real application and has thereby achieved an average current consumption of 1.58mA. With such a configuration the current consumption of a control unit which previously constantly consumed 105mA, has been reduced to a bare 6.5mA in current saving mode.
This translates into a reduction by 94%. There are no additional costs, no other control unit in network must be renewed and the control units wake-up from their current saving mode in a very short time.
The same configuration, with similar current consumption reduction can also be used to emulate the “Standby Mode” of a Partial Network. Though, in such case, one must live with the disadvantages of a Partial Network described above and that e.g. all network control units which are supposed to support the “Standby Mode” – must be adapted.

There are many ways to reduce the current consumption and with that to reduce the CO2 emission. Renesas is of the opinion that an approach combining the latest microcontroller technology with the Pretended Network is the most efficient and the least risky way to reduce the current consumption of control units in cars with reasonable costs (refer to figure 4).
A similar higher demand would also trigger a further development of the last remaining large load; the CAN transceiver with its 5mA accounts for almost 80% of the standby current. With contemporary 0.5mA, control units with standby currents of 2mA in Pretended Network while still retaining all the advantages would then be feasible.
Already today, Renesas automotive series RH850/F1x microcontrollers offer full functionality with 50% less current consumption and the current saving in Pretended- or Partial Network applications is even higher, namely above 90%.

Begin your revolution today at RIoTboard.org