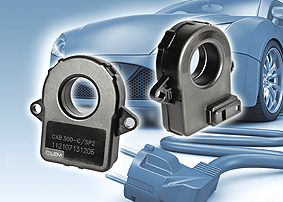 The ever more stringent requirements for energy efficiency and reduced CO2 emissions are leading car manufacturers to increasingly depend on on-board electrical components. From electric power-steering and stop-start technologies to on-board navigation and infotainment systems, the additional loads on the electrical circuits and particularly the battery are making it essential for the car makers to control the energy generated and consumed by the various systems.

Even more dependent on accurate electrical controls are the hybrid- and electric-vehicles entering the market. These vehicles require accurate control of not only the electric motors driving the wheels, but also of the electric energy available in the batteries to propel the vehicle, and their charging process, ensuring that the cars charge safely despite the high voltages and currents present during the process. These innovative applications call for the development of new sensor technologies capable of measuring the consumption of electricity on-board the vehicles while meeting the stringent quality and dependability demands that are mandatory in the automotive industry.
Electronically-controlled motors have been around for several decades. They propel train locomotives, robots, cranes, airport baggage-handling systems, and any system whose motion is electronically-controlled. Sensors are used to measure the electric currents going through these motors in order for the electronics to control the speed and torque with which the motors are to operate. Hybrid- and electric-vehicles also use high-power motors to move the wheels and accelerate the car, and thus require sensors capable of accurately measuring motor currents, while at the same time meeting the automotive requirements of small size, low weight, low energy consumption, a large operating temperature range, and obviously low cost.
Thus, new current sensors have been deve­loped specifically designed for automotive electric motors ranging from a few tens of amperes to several hundred or even thousands of amperes of current flow.
For example, LEM’s HC2 family of sensors measures up to 200A and the HC20F family up to 2000A as well as meeting automotive specifications. Solutions integrating the measurement of the three phases of a motor in one package also exist.
The measurement of battery currents in automotive applications has existed for several years. These systems focus on the measurement of the 12V battery parameters, including current, voltage, and temperature to enable the analysis of the battery’s ability to deliver energy when needed. Start-stop systems, for example, make it fundamental that the battery is in optimal condition to avoid stranded vehicles at traffic lights! Current sensors are essential to these vehicles. The use of high-power lithium-ion batteries in hybrid- and electric-vehicles compounds the need for accurate measurement of the battery’s parameters. LEM’s new CAB family of sensors has been specifically designed for these automotive battery packs, and provides extremely accurate battery-current information over the entire temperature range using a standard automotive CAN-bus for easy integration into the vehicle’s systems. This sensor uses fluxgate technology (the same principle used during the war to determine the location of nearby submarines) to achieve such high-accuracy measurement with neither offset nor temperature drift. It complements the DHAB family of sensors that use the more traditional Hall-effect principle to measure currents without contact, and are thus galvanically isolated. 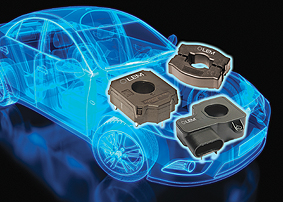 As customers demand shorter charging times for their electric vehicles, the power used to charge the batteries is increasing very significantly. This high power requires specialized charging stations that provide many times the existing household power to charge a vehicle battery in several minutes, instead of the several hours required when charging on the standard domestic grid. To make the charging phase safe for the user and the environment, electronics on-board have to ensure that the charging phase is immediately interrupted if an anomaly or current leak is detected.
Since vehicles charge on AC and DC currents, domestic panel-board sensors are no longer sufficient and special high-accuracy sensors with fast response time have been developed for this new application. LEM, in collaboration with its partners is developing new solutions to tackle this need, making it possible within a small and cost-effective package to measure milliamperes of DC leakage current in fractions of a micro-second.
Smaller, more efficient, and more compact electronic solutions are the next step for automotive manufacturers seeking to optimize and reduce the cost of their electric vehicles.
To achieve the same performance as existing technology, these smaller systems operate at higher speeds and frequencies and therefore contain high-amplitude ripple currents that destroy most existing measurement sensors today. Thus, sensors and other components capable of operating in this increasingly hot and harsh environment without failure are required. LEM is testing new materials and measurement techniques and has prototypes running to address this future need of the automotive industry.
The quest for increased efficiency and reduced emissions has directed the automotive industry towards increased use of on-board electric systems. From start-stop systems to hybrid- and electric-vehicles, these systems need to accurately measure currents to ensure proper and efficient vehicle operation. In addition, the technological advances in electronics demand new sensors capable of withstanding the hot and harsh environment under which they need to operate. The automotive industry is evolving at a faster pace than ever in its past and driving new technologies that will help it develop the solutions for the future of individual transportation.
www.lem.com