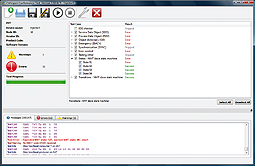 CAN in Automation (CiA) has released the version 3.0 of its CANopen conformance test tool (CTT). The completely redesigned tool is improved in many aspects and complies with the CiA 310 CANopen conformance test plan. The CTT is available free-of-charge for CiA members. Non-members may purchase it from CiA Headquarters in Germany. CiA uses this tool for the conformance testing of CANopen devices (CANopen certified by CiA). The tool runs on PCs with Microsoft Windows from Windows 95 to Windows 8 and requires a CAN hardware interface plus COTI low-level driver program. COTI software for different PC-to-CAN modules (esd, Ixxat, National Instruments, Port, and Vector) comes with the CTT software. Recently, Peak-System announced that they released COTI-DLLs for CiA’s test tool, which supports all of its CAN-PC interface modules.