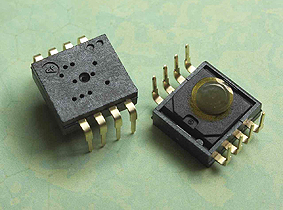 Optical Navigation Technology
The new sensors measure changes in position by optically acquiring sequential surface images and mathematically determining the direction and magnitude of movement from the changes in the images. The devices contain an Image Acquisition System (IAS), a Digital Signal Processor (DSP) and a two-wire serial port for the ADNS-2080 device or a four-wire serial port for the ADNS-3000 device. The DSP automatically processes images from the IAS to determine the direction and distance of motion without requiring mouse designers to deal with source code or firmware. The serial ports allow the devices to be programmed via registers.
Avago pioneered the optical navigation technology found in many mice used throughout the world today. To date, Avago has shipped over a billion optical navigation sensors to a wide range of global customers.