Toshiba Electronics Europe has announced the European launch of the first TransferJetTM adapter for iOS devices. The new TJEU00LTB adaptor is compatible with 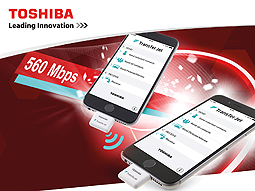 iOS 7.1 / 8.1 devices such as the iPhone, iPad and iPod fitted with a Lightning connector port and enables close proximity wireless data transfer.
TransferJet technology enables simple ultra-high speed data transfers with low power consumption, and works by simply bringing the two devices together. Maximum data throughput is 375 Mbps, and 100 MBytes of data can be transmitted in approximately three seconds.
All users need to do is attach the TransferJet adapter to an iPhone, iPad or iPod and download the iOS app from the App Store. Users simply select the data file to be transferred on the screen of a mobile device and then touch the device against the receiving device. The TJEU00LTB adaptor is compliant with Lightning iAP2 and provides high speed file transfer throughput for large data sources, including movies and pictures.
Toshiba has also recently launched a USB2.0 adapter, the TJEU00AUXB, for Windows® devices, and the TJEU00AMUB MicroUSB adapter module for devices running AndroidTM 4.0 onwards. These new adapters for Android and Windows offer a transfer rate 1.7 times faster, with 30% lower power consumption and 30% less volume than Toshiba’s previous models, the TJM35420UX and TJM35420MU, helping to preserve the battery life of mobile devices.
* TransferJet and TransferJet logos are licensed by the TransferJet Consortium.
* iPhone, iPad, iPod, App Store and Lightning are trademarks of Apple Inc.
* IOS is a trademark or a registered trademark of Cisco in the U.S. and other countries and is used under license.
* Windows is either a registered trademark or trademark of Microsoft Corporation in the United States and other countries.
* Android is a trademark of Google Inc.