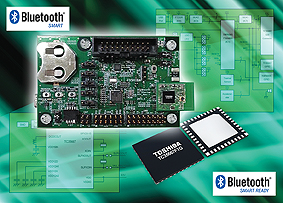 features a Toshiba BLE IC and microcontroller, hosted on separate printed circuit boards, together with sensors and the associated software development tools necessary to simplify system creation. BLE is finding uses in an increasing range of applications including wearable and healthcare-oriented smart devices, sensors and control systems. The growth of the Internet of Things is likely to accelerate its adoption.
Toshiba’s TC35667FTG BLE IC features a low-power circuit design and integrates a highly efficient DC-DC converter, reducing peak current consumption to below 6mA and deep sleep current consumption to below 100nA. The receiver has a sensitivity of -91dBm and transmitter output power can be varied from 0dBm to -20dBm in 4dB steps. In addition to the TC35667FTG, the BLE daughter board contains two oscillators (26MHz and 32.7kHz), 512kbit EEPROM, a PCB antenna and an RF connector for connection to RF testers.
The mother board is based around a TMPM395FWAXBG microcontroller featuring an ARM Cortex-M3 CPU core with an operating frequency of 20MHz, 128KB of internal ROM and 8KB of internal RAM. The MCU has an independent RTC and IO capable of shutting off power supplies and supports low power operation at 1.8V. The board also houses a thermal sensor, accelerometer and buzzer, and has GPIO, JTAG and USB interfaces. Integrated development environments (IDEs) from Keil and IAR Systems are usable with the starter kit enabling software debugging and testing to be conducted via the JTAG interface.