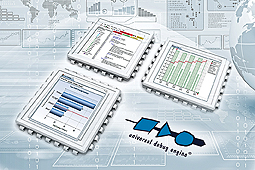 PLS Programmierbare Logik & Systeme presents its new Universal Debug Engine (UDE) 4.0 at its Booth 4-310 in Hall 4 at embedded world 2013, February 26 28, 2013 in Nuremberg, Germany. The new UDE 4.0 features greatly enhanced debug capabilities for multicore targets, optimized visualization options during system test and dedicated support for a wide range of the latest 32-bit multicore System-On-Chips (SOCs) from various manufacturers. With help of the newly developed target manager for the UDE 4.0, among other things, cores and functional units can now be specifically selected for debugging. In order to also be able to retain an overview with several cores, debugger window tabs and toolbars are core-specifically colored. The concept is enhanced by visibility groups for windows of individual cores or freely according to user requirements definable collections of debugger views. Furthermore, new names (alias) can be assigned freely for the window titles. Various compiler concepts for multicore targets are supported by a newly implemented multicore / multiprogram loader. Among other things, this loader enables the separate loading of memory images and symbolic information from the output files of the compiler, specifically for each individual core.
For the control of a multicore target, the UDE 4.0 enables the synchronization of two or more cores to so called run control groups in order to define common start and stop or common individual step. The user interface is the same for different on-chip synchronization mechanisms. The generalized concept ensures the greatest possible flexibility when controlling a multicore target, without the need to know the underlying on-chip logic in detail.