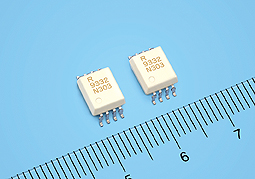 Renesas Electronics announced two new photocouplers PS9332L and PS9332L2, with an integrated insulated-gate bipolar transistor (IGBT) protection function, for applications such as industrial machinery and solar power systems.
The new PS9332L and PS9332L2 feature an integrated active Miller clamp circuit [Note 2] to prevent IGBT malfunction, world-top-class high-speed switching (20 percent faster than conventional products) among IGBT drive photocouplers with integrated IGBT protection function, compact 8-pin SDIP (shrink dual inline package), and guaranteed high-temperature operation. The photocouplers can be used for gate drive of IGBT devices used in inverter circuits for motor control, etc.
It is common to protect a circuit such as an inverter with insulating devices such as couplers when dealing with comparably high voltages.
A photocoupler combines in a single package a light emitting diode (LED) on the input side, to convert an electrical signal into light, and a photo detector on the output side, to convert the light into an electrical signal. The input and output sides are electrically isolated from each other because the signal is conveyed between them in the form of light. Types of photocouplers include general-purpose photocouplers (transistor output) for applications such as power supply, and IGBT drive photocouplers, which are used for gate drive of IGBT devices in applications such as solar power generators or general-purpose inverters. The new PS9332L and PS9332L2 are IGBT drive photocouplers consisting of a gallium-aluminum-arsenide (GaAlAs) LED as the light emitting diode, photo detector IC, and an IGBT protection circuit.