This year’s winner in the "Electrical Equipment” category 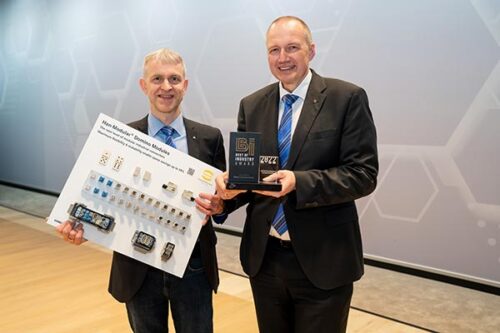 Norbert Gemmeke, Managing Director of the Global Business Unit Electric at HARTING (r.), and Heiko Meier, Product Manager for the Han-Modular® Domino Modules (l.), are delighted to have won the “Best of Industry Award” in the “Electrical Equipment” category.

The industry media of the Vogel Communications Group presented the “Best of Industry Award” in 24 categories  shortly before the turn of the year. The HARTING Technology Group with its Han-Modular® Domino modules emerged as the winner in the “Electrical Equipment” category.

The HARTING Technology Group stood right at the top of the winners’ podium with its Han-Modular® Domino modules. In the “Electrical Equipment” category, the next expansion stage of the modular industrial connectors has taken first place. The idea behind this next stage in the development of industrial connectivity already made a name for itself shortly following its world debut in the spring and convinced the HERMES Award jury. The modules based on the domino principle were acknowledged as one of the top 3 innovations of the year 2022. They were also awarded “Cable and Connector Product of the Year” at the first “Instrumentation Excellence Awards” in London in October.

Since 2016, Maschinen Markt (Vogel Communications Group) has annually awarded the best in the industry. The nomination phase is followed by five months of online voting during which around 20,000 readers of the publishing magazine MM Maschinenmarkt vote for their respective favourites. This year, for the first time, the award was presented in cooperation with other brands (PROCESS, LABORPRAXIS and DeviceMed) of the Vogel Communications Group – thereby representing an even broader section of the industry.

Norbert Gemmeke, Managing Director of the Global Business Unit Electric, is delighted to have won the award: “We are very proud of this award and would like to thank the readers who cast their votes for us. This award shows that we are right on track with our customers and partners with the advantages of the Domino modules. Saving installation space and weight, as well as the associated lower costs and the conservation of resources, feature as vital trend topics that concern us all in this day and age.”