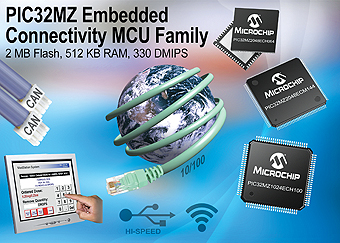 If there is one characteristic that all modern devices strive to demonstrate – irrespective of the end-application – it is responsiveness. The ability to react ‘immediately’ is, of course, an illusion, sustained by the speed with which the microprocessor can respond to an event.
Improving the response time of a microprocessor is often closely influenced by the software it executes, however the underlying metric is the theoretical maximum number of instructions that can be executed per second, or MIPS, subsequently improving this figure has long been the driver for microprocessor evolution.
There are a number of recognised techniques for pushing performance up, as measured using the industry-standard unit of Dhrystone MIPS, or DMIPS. The latest member of the PIC32 family of high performance microcontrollers, the PIC32MZ, harnesses the latest MIPS32 core from Imagination Technologies, which successfully combines many of these techniques to deliver a device that increases performance threefold over its predecessor.
The core at the heart of the PIC32MZ is the recently announced MIPS microAptiv™ core, which features DSP extensions and the microMIPS® instruction set architecture, which allows a combination of 32- and 16-bit instructions to run from memory at near-full rate. In addition, the entire device is capable of running at up to 200MHz, which together results in a device that delivers 330 DMIPS; three times the performance of the PIC32MX family.
The microAptiv DSP extensions provide 159 additional instructions providing single-cycle access to the microarchitecture features that accelerate digital signal processing, such as multiply/accumulate. This means DSP algorithms can execute in as much as 75% fewer instruction cycles than the same algorithm executing on the PIC32MX. The PIC32MZ is the first family to use the microAptiv core, which as mentioned also introduces the microMIPS feature of 16-bit instructions, resulting in significantly higher code density; as much as 30% greater density than the PIC32MX.
The PIC32MZ is also capable of running at higher clock rates, up to 200MHz, which is around twice as fast as the PIC32MX. Together, these features deliver a threefold improvement in raw performance, allowing the PIC32MZ to address applications that demand faster response times when running ever-more complex software.

The PIC32MZ integrates an Ethernet 10/100 MAC and PHY and it also features the highest ever number of serial channels offered in a PIC device. These features, coupled with a high performance core capable of running multiple protocol stacks simultaneously, makes it the most capable 32-bit MCU for applications targeting embedded connectivity. Another first for a PIC® microcontroller is the addition of an integrated Hi-Speed USB MAC/PHY, complemented by dual CAN ports, which further enforces the PIC32MZ’s connectivity credentials. 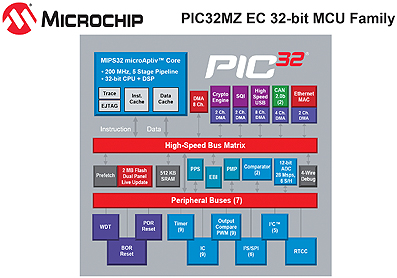 An important aspect of any connected device today is security and, here, the PIC32MZ offers a number of features designed to make embedded connectivity more secure. A full-featured hardware crypto engine, with a random number generator, provides high-throughput data encryption/decryption and authentication, such as AES, 3DES, SHA, MD5 and HMAC.
Beyond the high performance core and communications-oriented peripheral set, the PIC32MZ also features two further innovations never before offered in a PIC® microcontroller, both of which are intended to address emerging real-world needs of the target applications; both innovations deal with the need for more sophisticated memory systems.
An increasing number of OEMs are finding that the growing complexity of embedded software means in-field upgrades are becoming unavoidable. Instead of dismissing this trend as a development issue, manufacturers like Microchip are addressing the need head-on, by introducing innovative solutions to in-field software upgrades.
The PIC32MZ is at the leading edge of this effort, by integrating Dual-Panel Flash memory that allows a full software update to take place while the device is in service, executing program code at full speed. It achieves this by dividing the embedded Flash in to two physical and logical blocks, or panels. Each panel has its own charge pump and programming circuit, which means one panel is effectively ghost memory right up to the point when it becomes the main memory. As both panels essentially operate independently, one panel continues to operate at full speed while the other is updated in the background, without interrupting program execution.
Once the software update is installed and validated, the device can be reset and start executing memory from the newly programmed panel.
This feature allows a range of software issue to be addressed in the field without a service interruption, while also retaining the last known good software build in one panel at all times. The benefits of this innovation are far reaching; service calls will be minimised, service interruptions could be avoided entirely and software glitches could be resolved in near ‘real time’.
The other innovation intended to improve memory interfacing is the addition of an SQI port. SQI, or Serial Quad Interface, is a high-speed memory interface protocol that uses up to four wires, as opposed to the more common SPI or I2C interfaces which use only one pin for data exchange. The SQI interface uses a multiplexed bus to access 4-bits – or nibble – of memory at a time when accessing SQI-compatible memory devices, while still retaining SPI-compatibility.
The microAptiv core used in the PIC32MZ features an MMU (Memory Management Unit) and instruction and data caches, and up to 2048 KB of on chip flash and up to 512kbyte of SRAM, capable of supporting multiple protocol stacks running simultaneously, as well as buffer space to support audio processing, and frame buffers to support displays up to WQVGA resolution without the need for an external graphics chip.

As the new PIC32MZ family is developed for high-end communications-oriented applications that need improved graphics, faster real-time performance and increased security, it is supported by a range of development kits that give full access to its advanced peripherals and crypto engine (for those family members that feature the optional crypto engine). These are further enhanced by a Multimedia Expansion Board II, Starter Kit Adapter and Plug-In Module which supports the Explore 16 Modular Development Board.
The latest addition to Microchip’s 32-bit MCU family drives performance, connectivity and security to new levels in embedded devices. With a threefold increase in raw processor performance, the addition of 159 DSP-specific instructions and innovative memory subsystem the PIC32MZ is well placed to enable a new generation of embedded devices.

RFduino much more than just a tiny computer with Bluetooth 4.0