Presents Insights on Next-Gen Infotainment System at MOST® Forum. 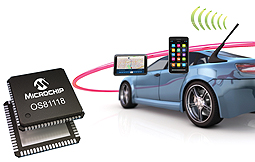 Microchip Technology Inc., a leading provider of microcontroller, mixed-signal, analog and Flash-IP solutions, announced that Daimler AG is the latest automotive company to adopt the latest-generation MOST150 standard, using Microchip’s Intelligent Network Interface Controllers (INICs), as presented by Daimler’s Dr. Jan Bauer at the recent MOST® Forum in Germany. Dr. Bauer explained why Daimler chose MOST150 for its flagship Mercedes-Benz S-Class sedan’s next-generation infotainment system. He also provided insights on how they easily moved from a legacy MOST25 system to gain performance improvements of 150 Mbit/s, while utilizing MOST150’s many new features, including isochronous video streaming and the new MOST Ethernet Protocol (MEP), which is a dedicated channel that was added to the many transport mechanisms already supported by MOST technology.

Dr. Bauer explained how Daimler was able to take advantage of the high streaming-data transfer speeds to achieve the simultaneous playback of four HD videos, due to MOST150’s elimination of addressing control or overhead. He also cited the standard’s ability to efficiently route data to the appropriate interfaces, such as I2S for audio and I2C™ for control, which eliminates interrupts to the host processor for streaming, freeing it to perform other tasks or enabling the use of a less-expensive MPU.
Regarding MOST150’s new MEP, Dr. Bauer said in his accompanying paper, “The MOST Ethernet channel can transport unmodified Ethernet frames, according to IEEE 802.3. This permits software stacks and applications from the consumer and IT domain to be seamlessly migrated into the car. TCP/IP stacks, or protocols utilizing TCP/IP, can communicate via the MOST bus without any modification. Thus the new generation of MOST technology provides the automotive-ready physical layer for Ethernet in the car.”

Dan Termer, vice president of Microchip’s Automotive Information Systems Division, commented after Dr. Bauer’s presentation, “MOST technology is the de-facto industry standard that carmakers use to create a high-speed networking backbone within their vehicles.”