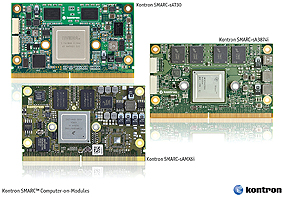 The Standardization Group for Embedded Technologies (SGET) has officially announced the ratification of the new SMARC™ Computer-on-Modules specification. Kontron played the leading role in the development of the specification which had the working title ULP-COM. This new Smart Mobility ARChitecture for ARM/SoC-based extremely compressed Computer-on-Modules was approved within a short time frame. The speedy ratification goes to underline the market’s need for a new ARM/SoC-based form factor standard, as well as, the agility of the newly created SGET body. Coinciding with the adoption of this new standard, three design lines have already become available at Kontron. Developers can now begin engineering innovative ultra-low power devices based on the new SMARC™ standard. The ratification of the SMARC™ standard underlines Kontron’s power to innovate in its role as an international technology leader and as a ‘standardizer’ of Computer-on-Modules. With over 15 years of experience in the development of COMs, Kontron provides extensive support along with notably long-term product availability. Industrial customers, partners and module manufacturers profit from the high level of investment security which Kontron offers. Kontron’s success story began in 1998 with DIMM-PC® which, in 2000, led to the ETX® standard being licensed worldwide. The X-board® specification followed in 2002 and ETX Express® as the technological basis for PICMG’s® COM Express® technology was launched in 2003. COM Express® was finally developed by members of the PICMG® standards consortium, and Kontron was
a major contributor to the technology.