Swedish company, Strategic Test AB, has now released its next generation “UltraFast” PCIe instrumentation platform called UF4e. The new platform fulfills the multiple customer requests for increased streaming bandwidth and higher sampling rates. Acquisition data is stored inside the 4 GByte on-board buffer and can be read out at more than 3 GByte/s through the PCI Express x8 Gen2.
The ¾ card length plug-in cards are compatible to Gen1 and Gen3 and need a PCI Express slot with 8 or 16 physical lanes.

To optimize data storage and bus transfer, repetitive signals can be stored into separate segments using Multiple Recording mode while transferring data in parallel; a feature that is widely appreciated for RADAR applications. The compact UF4e card is also equipped with different acquisition modes like single-shot, streaming (FIFO), segmented (Multiple Recording), gated (Gated Sampling) or the combination of

segmented acquisition of fast signals in parallel to slow continuous data recording (ABA mode). All trigger events can be time stamped. Timestamp clock can either be based on the internal clock circuit or an externally fed-in time reference signal.
The four (or two) input channels are completely separated and have one monolithic ADC per channel, as well as its own high precision pre-amplifier. Each amplifier can be configured separately by software. Software can select one of six input ranges (±200 mV up to ±10 V), 50 Ohm or 1 MOhm input impedance and AC or DC coupling. Furthermore a bandwidth filter can be activated which suppresses high frequency noise signals. The UF4e cards have an extremely powerful trigger engine that can combine the two external trigger inputs with channel trigger of each channel by a logical OR or AND. The channel trigger detection can be programmed for edge, level, window or pulse width.

Synchronization with Star-Hub
Up to eight UF4e cards can run synchronously in one system. The star-hub module option distributes clock and trigger signals between the cards. The star-hub module can combine all of the trigger sources of all connected cards making it possible to use any trigger source as a starting event for the complete system. Using the star-hub a total of 32 channels with 500 MS/s and 14 bit resolution can be acquired simultaneously. 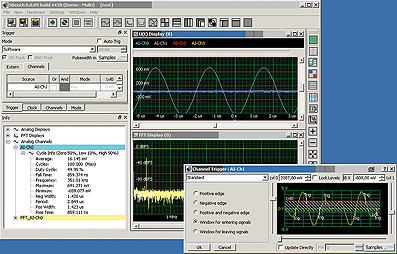 The UF4e-4451-x8 is the first product of a new series of ultra fast digitizers. The UF4e platform increases the bus transfer speed by factor 16 compared with former UF2e and MF3e platforms with PCI Express x1 Gen1 interface. Together with the clock concept and the powerful FPGA this platform is designed to be the base for new, ultra fast, high resolution products of the next generation. Based on the internal modular concept, new products with different ADCs and different sampling rates can be released to the market faster than before. During 2013, it is planned to release further models with 16 bit ADC resolution and 130 MS/s and 250 MS/s.
The UF4e platform is not limited to A/D modules but will also be used as a basis for fast digital data acquisition and arbitrary waveform and pattern generators.
SBench 6 Instrumentation Software
All features of the new card series are fully supported by the UltraFast SBench 6 software. SBench 6 has been optimized to handle several GByte large signals and is running natively under Windows and Linux, both 32 bit and 64 bit. With this, SBench is the first out-of-the-box measurement software with full Linux support.
SBench 6 has been designed for the UltraFast PC instruments and supports all usage modes and settings of the UF4e series with comfortable setup dialogues. The software is able to run the cards in oscilloscope mode as well as long time transient recording mode (streaming mode). A special feature of SBench 6 is the segmented view that allows display of segment based signals together with signals of a second timebase (ABA mode) as well as highly precise timestamps. Besides this SBench 6 has many build-in features for comfortable data analysis and documentation like FFT analysis, a function interpreter, several integrated analysis functions, export into ASCII, Wave, MATLAB, comment functions for signals and display details as well as a comfortable printout function.
The UF4e series – like the slower platforms UF2e and UF3e – is based on the proven SPCM driver interface. This interface incorporates a common API for all current products from Strategfic Test. For example, a program designed for the UF3e-4140 card (1 channel 14 bit 400 MS/s digitizer) only needs a couple of code lines changed to run with the new UF4-4451-x8.
Customers who want to program by themselves can use the proven SPCM driver for Windows and Linux, which are included in the delivery. A set of standard programming examples is provided to illustrate the boards main signal capture functions.
Extensive support includes Visual C++, Borland C++, Gnu C++, Visual Basic, VB.NET, C#, J# and Delphi code.
A 2-year manufacturer warranty is standard for all UltraFast hardware products.
Drivers, software and firmware updates are available free of charge as well as the support given directly by the developer engineers themselves.