Microchip’s BodyCom™ technology is world’s first to use the human body as a secure, low-power communication channel 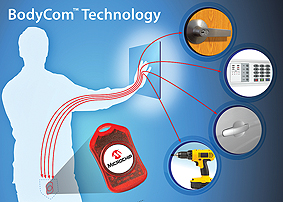 Because no RF antennas are required, BodyCom technology simplifies circuit-level design and 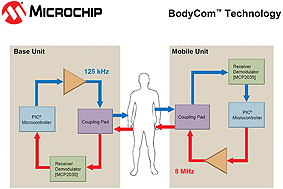 lowers the bill of materials (BOM). All of this is enabled by the BodyCom Development V1.0 Framework, which is supplied through free software libraries that work on all of Microchip’s 8-, 16- and 32-bit PIC® microcontrollers, of which there are more than 900.
BodyCom technology is activated by capacitively coupling to the human body. The system then begins communicating bidirectionally between a centralised controller and one or more wireless units. There are many applications where secure wireless communication is essential, and there is no more secure channel than the human body. This is especially true when bidirectional authentication is added to support advanced encryption, such as KeeLoq® technology and AES.
For example, BodyCom technology helps to prevent the “Relay Attack” problem that is typical in automotive passive-keyless-entry security systems.
Most secure, short-range communication designs are battery powered and highly cost constrained. BodyCom technology significantly increases battery life by eliminating the need for a wireless transceiver or high-power inductive fields. It also simplifies development and lowers BOM costs by making antenna design unnecessary and by using a low-frequency framework with a common microcontroller and standard AFE frequencies (125kHz and 8MHz), with no need for external crystals.
BodyCom technology also eliminates the cost and complexity of certification because it complies with FCC Part 15-B for radiated emissions. 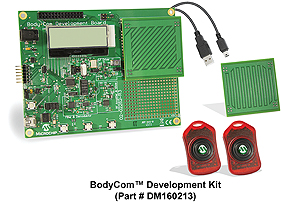