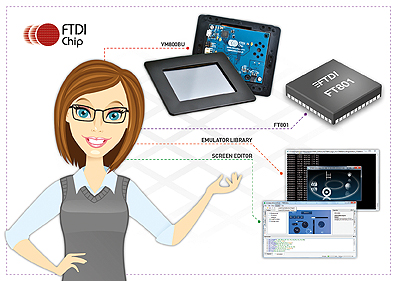 support facilities. These are designed to be utilised with both the established FT800 graphic controller IC and the newly announced FT801, with capacitive touch enabled interface and multi-touch capabilities, which has now been ramped up to full production levels and is available in volume quantities forthwith.

The EVE Emulator Library, is the first of the new support resources. This is a behaviour modelling software tool through which engineers can emulate the display and touch functions of the FT800 (and in the near future for the FT801 in single touch rather than multi-touch mode) without the need for any hardware. It also allows engineers to quickly create demos to show to their project managers or prospective customers. Working on the Windows operating system, it is capable of delivering high level emulation. This tool benefits from an exact SPI/I2C interface configuration and consistent memory map of FT800/FT801 silicon. EVE sample applications employ a hardware abstraction layer (HAL) to make the application logic fully independent from the hardware platform. Sample applications can be adapted on the EVE emulator with the need to alter the application logic.

In addition, FTDI Chip has introduced the release of the VM800BU, which is a development module for the FT800 with a USB interface provided by a FT232H bridging IC. This means when looking to work with EVE-based development modules, it is no longer necessary to source a separate USB converter cable, as the necessary functionality is already present within the board itself.

The EVE Screen Editor is a Windows-based software tool which enables engineers to study display commands and experiment with generating their own display lists by which to control EVE ICs. It can also be utilised to access a number of the various EVE development platforms available (such as the VM800B, VM800C and recently unveiled VM800BU) via FTDI Chip’s MPSSE cable without the need for any supplementary code to be written.

Finally, the expansive set of Arduino libraries offered by FTDI Chip to accompany its EVE offering has been further updated in order to serve both the FT800 and FT801 controller devices. These FT800 Arduino library can be downloaded at: http://www.ftdichip.com/Support/SoftwareExamples/Eve/FTDI_V1.2.0_09072014(FT800).zip

“For FTDI Chip ‘Design Made Easy’ is not just a strapline, it represents the company’s core philosophy. It is all about providing our customers with an environment that is conducive to unbounded creativity,” states Paul Huang, Display Product Line Manager at FTDI Chip. “By enhancing and updating the support provisions available for EVE and continuing to expand their scope, we have set the foundations upon which engineers can implement inspirational, highly effective human machine interfaces.”

Now in full production, the FT801 graphic display controller IC is based on FTDI Chip’s award-winning EVE technology. Suitable for WQVGA and QVGA displays this object-oriented device renders image data line-by-line rather than pixel-by-pixel, thereby dispensing with the need for a frame buffer. It has the ability to execute alpha blending and anti-aliasing operations, as well as supporting 18-bit RGB colour with 2-bit dithering for improved colour tone. Midi quality audio functionality is also included. Through the capacitive touch controller interface multiple touch points can be simultaneously determined. This permits detection of complex gestures. US pricing for the FT801 is$4.15 for 1000 units.