The AXIOMET brand has existed since about 7 years and its offer includes a wide range of measuring instruments: universal multimeters, clamp meters, pyrometers or oscilloscopes and generators. I would like to present you the possibilities of the AXIOMET AX-2040 clamp multimeter, which is particularly worth describing thanks to exceptional easiness of operation.

Having purchased the AX-2040 gauge, we receive a universal clamp meter that is capable of measuring alternating voltage, direct and alternating sinusoidal current as well as resistance, it performs non-contact current detection, and what is more, there are only seven buttons on the control panel.
Why only seven? Well, AX-2040 is fully automatic equipment that is activated with only one button. Multimeter detects, by itself, what physical value we want to measure, it also independently adjust the current measuring scope.
In a package, we receive, apart from a zipper flipcase with a loop for firm grip, a gauge, measuring cables together with tip covers and user’s manual. Note! The kit does not include batteries necessary to initiate the gauge (two LR6 – popular AA batteries – are needed). Enclosure is two-colored: yellow part is made of plastic, whereas grey elements are like hard rubber to the touch. This assures firm grip.

The gauge is turned on by means of a big, round button that needs to be held for approximately a second to eliminate the possibility of an accidental start up. After initiation, the device emits a test sound and all symbols on the LCD display become dimmed. After completion of the self-test, the display shows the “Auto” message. It means that the gauge is in the default mode of automatic measurements. If a gauge detects magnetic field in the clamps, it will display the value of the measured current. If it detects the current on measuring cables terminals, it will indicate its value too. If the current is not detected, it will measure electric resistance and will display the value of measured resistance.
And what if our gauge detects current flow and, at the same time, we will apply voltage to the terminals? The experience shows that the battle for a place on the display is won by the current measurement. The second in the queue is, of course, voltage measurement and the last is resistance measurement.

If we want to hold on the display, currently displayed value, we have to press the “HOLD” button. The same button is used when we want to release the display so that it continues to display a result of currently performed measurement.
If we want to save currently measured value in the gauge’s memory, we use the SAVE button. The device can save up to ten measurements. In order to read the saved data, press the READ button. In order to leave the mode of reading saved measurements, press the RESET button.
The RESET button is also useful when we want to put the device in the default mode. After pressing the RESET button, the device runs the autotest. So, it corresponds to manual activation and deactivation of the device. Pressing the NCV button makes the gauge enter the mode of touchless voltage detection. This is the only mode that, after device’s initiation, must be activated by means of an extra button. In order to return to the automatic mode, press the same button. The mode of voltage detection itself, works almost like clockwork. It is sensitive enough to detect a cable in the wall, but it also signals the presence of metal elements by means of single beeps. While detecting the voltage in the cable wiring that is not “hidden” in the wall, it works perfectly informing about the voltage presence by means of loud and repetitive beeps.
The function of the last button that is distinguished with a blue color is turning on the display’s backlight which is performed by means of two white LED. The display is clear and its backlight satisfactorily even.

The below table presents accuracy rates of respective multimeter’s functions based on the data provided by the manufacturer. It is also worth mentioning about display’s scale. In case of the presented device, it is 3,75 digits, whereas, the majority of this class devices offers the display with the width of 3,5 digits. 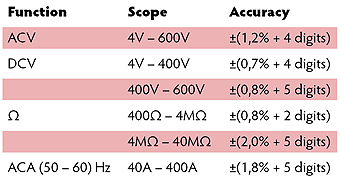 Multimetre meets the IEC 1010-1 1000V CAT II requirements, holds category III of overvoltage as per IEC 61010-1 and may operate in the second pollution degree environment.

Just like in every device, also in the AX-2040 series multimeter, some disadvantages can be found. The first deficiency that I found, is lack of possibility to measure direct currents. Such option is often very useful, if, for example, in the industrial environment we want to check the output current of automation devices power supplies, and at the same time, we do not want to, or we cannot disconnect the circuit to establish serial connection between the circuit and ammeter. The possibility of measuring direct current is offered by e.g. the AXIOMET AX-203 series.
Quite important is lack of RMS measurements option. Basically, the AX-2040 multimeter can be used in measurements of sinusoidal and constant waveform.
The third disadvantage of AXIOMET device is lack of short circuit detection mode. A buzzer that signals the presence of galvanic bonding is very useful in all kinds of maintenance tasks, and its lack is of great importance.
Making a decision to buy AX-2040, we will have to get used to the fact that there is no zero display. The measurement of zero value is displayed as Auto, since the gauge, failing to register any electrical value, does not know what unit to display.
To sum up, the AX-2040 multimeter is a fairly good device worth its price. For approximately 150 PLN, we get a reliable gauge that can be used for basic electrical measurements with acceptable accuracy.