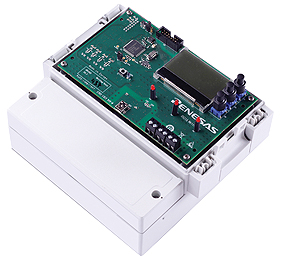 save time by eliminating the need to design their own metrology and calibration routines, required for a billing polyphase meter design, while complying with the most stringent IEC norms. The new “Bill It! – Smart Meter RX21A” is based on Renesas’ RX21A group of microcontrollers (MCUs), integrates the metrology front end and the application processor in a single chip. The RX21A group devices are equipped with three, four or seven independent 24-bit delta-sigma analogue-digital converters (ΔΣ-ADC). They are therefore well equipped to accommodate single-phase, split-phase and three-phase plus neutral billing electricity meters respectively. The ΔΣ-ADC channels include a programmable gain amplifier (PGA), which allows the target meter to cover a dynamic range between 10mA and 100A at enhanced temperature range. By storing calibration data in the flash, the RX21A devices cover applications better than Class 0.2S, thus exceeding the most stringent IEC metering requirement presently available, the IEC62053-22. Renesas has designed the “Bill It! – Smart Meter RX21A” for a very wide target specification, allowing for easy implementation and eventual downsizing to a billing electricity meter design tailored to the customer’s needs.
The solution includes an intuitive PC graphical user interface (GUI), providing engineers during the design phase with all the information they need to trim and analyse the data measured by the ΔΣ-ADC channels. This covers both graphical feedback from the ADC data as well as prepared data after the calibration steps, frequency analysis and separation of active/reactive energy use.
Each kit contains the Bill It! Polyphase Meter, a CD-ROM including the embedded metrology and calibration software source code, the PC GUI, the board schematics, the bill of materials, Gerber files, user manual, quick start guide and the electrical connection setup needed to use the electricity meter.