The Latest HMI Solutions from 1D to 3D 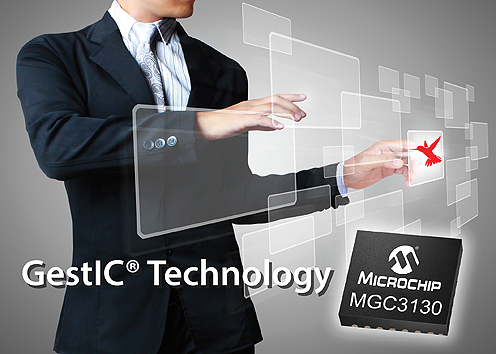 Just a few years ago Touch revolutionized input: mechanical buttons, keyboards and sliders were replaced by static plastic or metal surfaces. It meant that operator interfaces could be incorporated into a device, and unobtrusive and modern design became increasingly common on the factory floor. The technology – capacitive touch – is based on a capacitor whereby the human finger acts as the actuator for the capacitor. Ingenious designs also enable proximity switches to be implemented as well. In this case the control system is only active shortly before it is activated, thus reducing energy consumption. This is known as “1D” input.
Then, with the arrival of projective touch and resistive touch technology, the Multi-Touch was born. Here, users touch a touchscreen fitted in front of the monitor screen. Touch screen controllers calculate the touch point coordinates and transmit the data for processing. This is how “2D” input technology works.

Now there is “3D” input – gesture control “Our customers often ask for this,” reports Ileana Keges, Product Sales Manager for Microcontrollers at Rutronik Elektronische Bauelemente GmbH. “It has quite a few advantages over 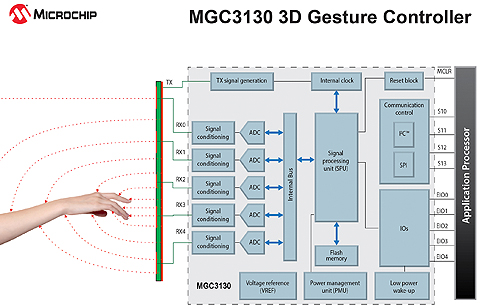 standard touch technologies. Sensitive surfaces last longer, sterile surfaces remain sterile. Operators no longer need to wear gloves to operate machines from which oil or corrosive liquids might flow. Microchip has developed a solution for the purpose which we are pleased to recommend – the GesticIC MGC3130.”

The near-field 3D tracking and motion controller is based on patented GestIC® technology from Microchip, which offers highly sensitive detection without blind spots and with a range of up to 15 cm. The input field is created from an electrode field, the e-field sensor, and the MGC3130 microcontroller analyses the signals. 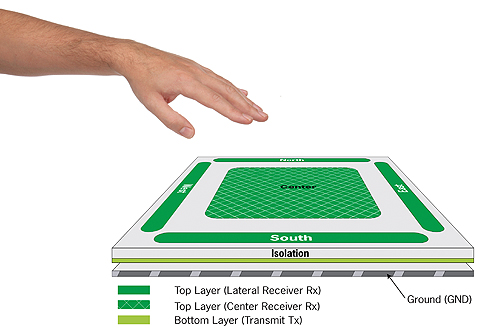 The sensor panel consists of at least four electrodes, positioned at right angles to one another. They develop an electrical field of 3V and maximum 100kHz, which is spread evenly. If changes occur in the field, caused by hand movements, the sensor will detect these tiny signal changes. The MGC3130 processes the results in real time thanks to its 32 bit digital signal processor. The four electrodes can register movement in X, Y and Z directions. From these the MGC3130 calculates the hand movements. “It could be not only simple movements such as up and down, right and left, but also circular movements and symbolic gestures, a total of eight different gestures,” explained Ileana Keges. This enables the machine operator, for example, to open or close a valve by turning an imaginary button or to increase or decrease a fill level by making up and down movements.
The distance of maximum 15 cm ensures that only the intended motions are processed. “Since a conductive object needs to change the electrical fields in order for gesture recognition to take place using this technology, ‘false inputs’ caused by light or sound cannot occur”, explained Keges. Automatic self-calibration eliminates potential errors in the system and ensures consistent precision throughout the product’s entire life. 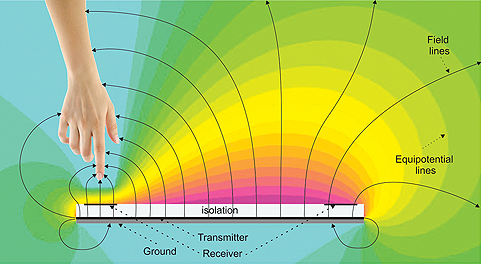 Any solid, conductive materials can be used for the electrodes, for example boards, PCBs or conductive film. “That makes GestIC technology from Microchip a very cost-effective solution,” said Ileana Keges. Thin materials allow the solution to be integrated invisibly behind a housing without affecting the entire design of the device. The sensor can be installed behind non-conductive materials, e.g. 1 cm thick glass, plastic or ceramic. The area of the sensor is minimun 25 × 25 cm, maximum 140 × 140 cm. This means it can adjust to existing applications and an upgrade from 1D or 2D to 3D is easy to do. “These different technologies can also be combined if the electrodes are installed as a frame around a display that is also used as a touch interface. A practical application for this is a control panel with a display and buttons,” continued Ileana Keges.
Power uptake in active detection mode and continuous operation is just 150µW.
Moreover the MGC3130 is fitted with a few energy-saving features. The ‘approach detection’ facility provides a proximity switch. ‘Self-wake-up from sleep’ keeps the chip in self-wake up mode until the proximity sensor recognizes a movement by the user. Whereupon the system automatically switches into full sensor mode. If the user’s hand leaves the detection area, it switches back to energy-saving mode.
“The sensor’s electrode design requires a certain amount of care, otherwise gestures will not be clearly recognized. To make developers’ work easier, Microchip supplies the Hillstar Development Kit as a reference,” explained Ileana Keges. 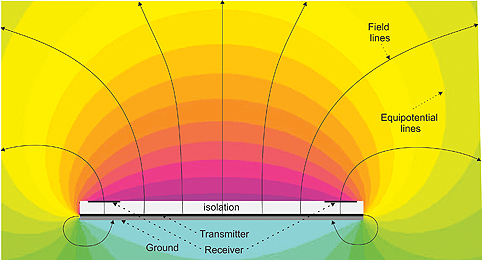 The Hillstar contains not only the GestIC® technology but also the Colibri Suite. The latter is used to set customer-specific parameters. This provides high-resolution X/Y/Z hand position tracking data such as stroke, circular and symbolic gestures at the digital output of the MCG3130.
At entry level Microchip offers a number of demo-kits, such as a light control system. In stand-alone mode the MGC3130 controls a bar of LEDs by hand movement.
The individual LEDs can be switched on and off in sequence. A circular hand movement controls light intensity. This is made possible with feature-rich ‘Aurea’ GUI software. Not only does this enable the MGC3130’s parameters to be set; it also simplifies the updating and saving process.

“Customers to whom we have presented this system were very enthusiastic. Particularly for applications where machine operators wear gloves, whether during a medical intervention or on the factory floor, it is the ideal solution,” said Keges.

Aside from the GestIC® technology from Microchip, Rutronik also offers gesture control systems by Vishay and Osram. “However it is not possible to compare them because they are based on an entirely different principle”, clarified Ileana Keges. Vishay and Osram opted for an optical solution. The proximity sensor / gesture control board by Vishay is based on the VCNL4020 proximity and ambient light sensor. With a radiance intensity of typically 80mW/sr at 200mA, it enables hand gestures to be detected up to 15cm above the sensor board. The movement is recognized by comparing the infrared signals on every transmitter. If the infrared light transmitted from an object, such as a hand, reflects, the VCNL4020 proximity sensor captures the reflection. To enable the signals from the different transmitters to be identified, they are multiplexed, i.e. they are cycled in rapid succession, one after the other. The proximity signal is output via the I2C interface between pulses. If a hand is located close to the board, it throws back a stronger signal from the transmitter above which it is situated. If the hand moves over and along the board, the signals from the other transmitters rise accordingly. This time difference in signal strength can now be analyzed in order to detect a movement and its direction.

GestIC® technology by Microchip is a unit consisting of a sensor surface and the MGC3130 Gestic IC. The maximum distance at which a gesture is recognized is 15cm.
In comparison, the optical version also requires a microcontroller to analyze the outgoing signals via the I2C interface.

An advantage of the optical solution is the larger distance (25cm) at which hand movements can be detected.

“Since gestures are the most natural movement, 3D control will start to be used in even more ways, from applications inside domestic living spaces, and inside the car, to care and residential homes, hospitals and many more.”￭