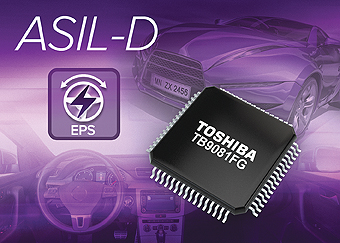 Toshiba has released a new brushless motor pre-driver IC for use in electric power steering systems (EPS). The TB9081FG features enhanced fail safe and failure detection circuits to achieve a high level of functional safety.
With safety-critical automotive systems such as EPS now needing to meet the requirements of ASIL-D, an industry standard designed to minimise the risk from system failures, it is vital for these devices to offer comprehensive redundancy and protection systems. The new TB9081FG integrates numerous protection functions, including 3-phase pre-driver circuits, fail-safe relay pre-driver circuits, motor current detection circuits, plus various additional failure detection circuits to detect latent faults. An initial diagnosis circuit to detect latent faults in the failure detection circuits is also incorporated to provide even higher levels of functional safety.
Toshiba has carried out a range of functional safety analyses to simulate various system failures and will provide customers with documentation, such as FMEDA, to support safety analysis and design. Built-in fail-safe relay pre-driver circuits drive the semiconductor relay between the motor and MOSFET (driver) and between the power-supply side and MOSFET (driver). The fail-safe relay pre-driver circuits have a total of five channels, three for the motor side and two for the power-supply side. Both have dedicated input terminals, making independent control possible.
Housed in a LQFP64 package, the TB9081FG measures 12.0mm × 12.0mm × 1.6mm. The device will be entering mass production in 2017, with samples available later in 2015.