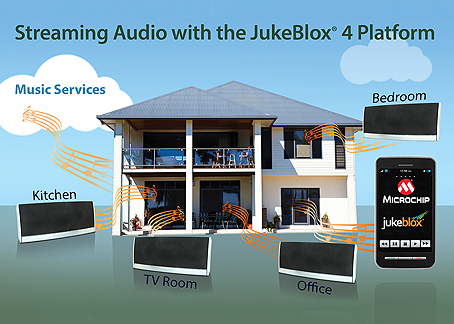 Microchip Technology Inc. announced from the Hong Kong Electronics Fair the release of its second generation multizone audio technology and a mobile app for use in whole-home-audio and multi-room applications based on the JukeBlox® 4 platform. The JB Multizone 2.0 feature enables tightly synchronized and highly robust audio streaming to multiple speakers in conjunction with the JB App, a turnkey mobile app that enables easy setup and operation of the wireless speaker.
Whole-home audio and multi-room audio systems allow consumers to group speakers into a zone to play back a common audio stream. Consumers create multiple zones each with their own audio streams such as pop music streaming to a pair of patio speakers while the children play outside and soothing classical music to four speakers downstairs, while dinner is prepared.
JB Multizone 2.0 utilizes advanced technology to reduce audio drops found in traditional Wi-Fi® streaming applications. Wi-Fi direct eliminates the need for each speaker in a zone to connect with the access point, thereby eliminating common problems associated with overloading access points. Bypassing the access point also reduces the RF bandwidth consumed by half resulting in increased streaming quality and/or the ability to add more speakers in a zone. The addition of Wi-Fi Multimedia (WMM) to Wi-Fi Direct reduces source to zone speaker latency and packet loss resulting in tightly synchronized audio playback with minimal audio drops.
JB App is a complete mobile app that enables OEMs to quickly deploy a complete whole-home-audio solution without having to manage an app development project. OEMs can choose between source code for custom app development or simply rebrand the app for release to consumers. Consumers use the JB App to create and modify zones, select audio sources and easily connect the speaker to the local Wi-Fi network. JB App source code is available at no charge and supports both iOS and Android™ platforms.