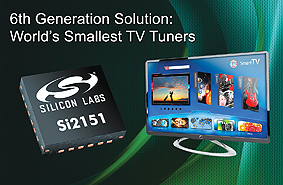 TV and digital TV markets, support both digital and analog video broadcasts, and comply with all worldwide terrestrial/cable TV standards. Leveraging Silicon Labs’ industry-leading architecture honed over five generations, the Si2151/41 TV tuners enable developers to enhance their TV and set-top box (STB) designs with unsurpassed linearity and sensitivity, the world’s smallest footprint, the lowest bill of materials (BOM) cost and ultra-low power consumption.
The Si2151/41 family provides an ideal, cost-effective silicon TV tuner solution for the world’s leading producer of TVs: China. According to DisplaySearch, China has led the world in TV shipments four years in a row. Flat-panel TV shipments (both LCD and plasma models) in China are forecast to grow from 57 million units in 2013 to 62 million units in 2017. Currently, Chinese TV makers provide 23 percent of global flat-panel TV shipments. Ultra-HD TV sets are projected to surge from 1.3 million units in 2013 to 23 million units in 2017, and Chinese manufacturers are expected to ship more than half of these TV units. Silicon Labs’ Si2151/41 tuners fully comply with the China GB/T 26686-2011 general specification for digital terrestrial television receivers and achieve significant margin to the minimum performance requirements defined in the GB/T 26686-2011 specification. Unlike other silicon tuners, which offer a large margin to the China GB/T 26686-2011 specification only for the VHF-Low frequency band, the Si2151/41 tuners deliver a large margin to this specification for the VHF-Low, VHF-High and UHF frequency bands. The current broadcasts in China use the UHF band (in which the Si2151/41 tuners significantly outperform all other silicon TV tuners), and margin in that band translates into tangible reception benefits for the consumer.