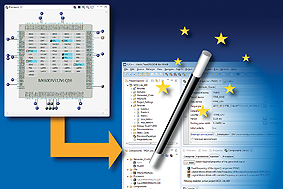 additions including comprehensive automatic integration with Freescale’s Processor Expert software and extended target and evaluation board support for the latest microcontroller devices from Freescale, NXP, Renesas, STMicroelectronics and Silicon Labs.
Already able to run as an Eclipse plug-in within Atollic TrueSTUDIO, the Freescale Processor Expert software configuration tool lets you design custom peripheral drivers for Freescale’s Kinetis family of microcontrollers with ease. A TrueSTUDIO workspace can automatically detect, configure and update projects, should a Processor Expert configuration change. This much tighter level of integration removes the burden on developers of having to change or set key target and build parameters, source and #include folder paths. With such “zero-effort” integration, developers can get started with their Kinetis-based design much more quickly and work more efficiently.
Now providing support for almost 2,500 ARM®-based devices and out-of-the-box support for over 160 evaluation / development boards, Atollic TrueSTUDIO v5.2 adds even better device coverage including the following: Freescale Kinetis KLx7Z, K11D, K21D and K24 devices; NXP LPC11E6 and LPC11U6 series; Renesas R-IN32M3 series; and the STM32F09 and STM3232F411 families from STMicroelectronics.
Atollic TrueSTUDIO v5.2 also provides support for Freescale’s MQX™ RTOS debug solution. Available as a free Eclipse plug-in from Freescale’s website, embedded developers can benefit from kernel-aware debug support during a TrueSTUDIO debug session. Features also allow inspection of the state of MQX RTOS objects through a variety of debugger views such as by task, semaphore or message queue.