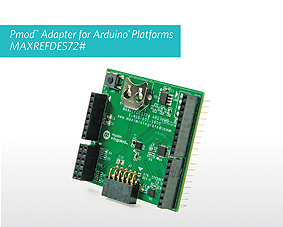 Achieve rapid prototyping with a wide range of production-quality sensors using the Pmod-to-Arduino adapter (MAXREFDES72#) from Maxim Integrated Products, Inc. The MAXREFDES72# allows any board with Pmod connections to plug easily into Arduino-compatible microcontroller platforms. Using industry-leading Maxim components, this adapter is ideal for quickly creating Internet of Things designs, and allows for more convenient accessibility to a broader range of digital processors and applications.
The Pmod form factor has long allowed integration of professional-grade peripherals into engineering prototypes, especially on FPGA-based platforms.
The MAXREFDES72# bridges the gap between the Pmod and Arduino-compatible form factors, thus opening a new audience of developers using Arduino-compatible microcontroller boards. The result is greater accessibility to quality components and faster, easier designs. Maxim offers 15 single function peripheral modules and 13 reference design boards with Pmod connectors, and now each is easily compatible with any Arduino-compatible development board.