Freescale Semiconductor announced the availability of the industry’s first general market AEC-Q100 qualified intelligent battery sensor to combine three measurement channels, a 16/32-bit MCU, and a CAN protocol module in a single package. Designed to support 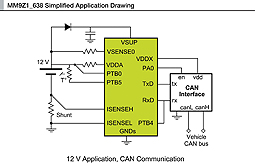