Continuing to expand one of the industry’s broadest portfolios of ARM-based microcontrollers (MCUs), Freescale Semiconductor introduces the lead families of the 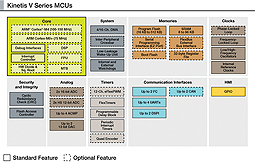 Kinetis KV4x, KV3x and KV1x MCUs
The KV4x family is the flagship of the existing V series, targeting digital power conversion designs, as well as PMSM and ACIM applications requiring high dynamic control. Engineered for optimal performance, KV4x MCUs incorporate a 150 MHz ARM Cortex-M4 processor with floating-point unit executing from up to 256 KB of Flash memory via a 128-bit wide interface that minimizes CPU wait states. With up to 30 timer channels – twelve provided by the highly flexible eFlexPWM – KV4x family devices provide multiple three-phase motor drive capabilities supporting dead time insertion, complementary pairing of PWMs, half cycle reload and fault detection. For sensorless motor control speed/position detection, two 12-bit ADCs support sample rates of up to 1.9 Msps and can be triggered by any module connected to the MCU’s internal peripheral crossbar, including timers, analog comparators or GPIO. For switched mode power supply applications, an eFlexPWM module provides 300 picosecond resolution, while the ADCs sample at 4.1Msps. This improves real-time control, ensuring that critical timing windows for data gathering and system updates are met. In addition, the KV4x family’s high degree of feature integration enables up to 30 PWM outputs, 38 ADC channel inputs, as well as CAN, UART and SPI interfaces to be housed in a 100-pin LQFP package.
The KV3x family, also Cortex-M4 based, targets intermediate PMSM applications with CPU frequencies of 100-120 MHz, up to 512/96 KB of Flash/SRAM and an optional external bus interface for off-chip system expansion.
The KV1x family represents the entry-level of the series and integrates the industry’s fastest Cortex-M0+ MCU core. With a CPU frequency of 75 MHz, plus hardware divide and square root block, KV1x devices offer a performance increase of more than 25 percent in math-intensive applications compared to other MCUs in the family’s class. Packing this high processing efficiency into a small, 32 KB solution positions KV1x MCUs as cost-effective options for BLDC and PMSM designs that currently rely on larger, more expensive 32-bit MCUs.