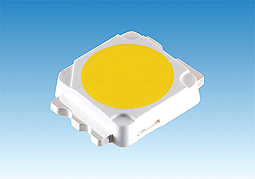 TTI, Inc. now stocks the first 1W LED in the market, which is manufactured on 200mm silicon wafer. Toshiba’s new TL1F1 white LED series offers makers of general purpose and industrial LED lighting solutions a cost-competitive alternative to current LED packages.
LED-chips are typically produced on 2- to 4-inch wafers with an expensive sapphire substrate. Toshiba and Bridgelux, Inc. have developed a process for manufacturing gallium nitride LEDs on 200mm silicon wafers, which Toshiba has brought to a new production line at Kaga Toshiba Electronics Corporation, a discrete products manufacturing facility in northern Japan. The new gallium nitride-on-silicon (GaN-on-Si) tech­nology has enabled Toshiba to replace sapphire substrates and to produce the LED-chips on a much more cost-competitive silicon substrate. TL1F1 series LEDs benefit from a small size of only 6.4 × 5.0 × 1.35 mm (L×W×H), a high luminous flux ranging from 85lm to 112lm (typ.) at IF = 350mA and a high colour rendering index of Ra= 80 (min.). The colour temperature of the white LEDs ranges from 3000 to 5000K (typ.). Reflow soldering is also available. Designed for an operating temperature range from -40 up to +100°C, the new 1W LEDs are ideally suited for general lighting applications, bulbs, ceiling lighting, street lights and floodlights