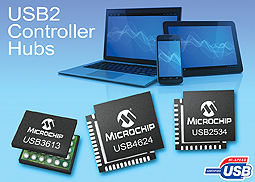 Microchip announces the expansion of the USB2 Controller Hub (UCH2) portfolio it gained with the recent SMSC acquisition. The seven new UCH2 ICs, across three families, are the world’s first to provide programmability, enabling the developers of PCs and mobile devices to configure their designs without external memory. Additionally, these are Microchip’s first UCH2s to support both USB2 and USB High Speed Interchip (HSIC) connectivity, maximum battery life via low-power modes such as Link Power Management (LPM), and the ability to replace wall chargers with advanced battery charging modes, such as BC1.2, Apple®, SE1 and China charging. For applications that need to communicate over multiple protocols, these UCH2s feature direct I/O bridging to I2C™, SPI, UART and general-purpose I/O. They also have the flexibility to support the behaviours of multiple operating systems, such as vendor-specific messaging and FlexConnect for simple port reversals.
While the PC market is converting to USB3, most market forecasts predict that USB2 will remain predominant in mobile devices until at least 2015. This continued use of both USB3 and USB2 challenges the designers of PCs and mobile devices to ensure interoperability while providing new features and maximum battery life. Microchip’s seven new UCH2s, across three families, address these needs for both PC and mobile manufacturers. Whereas competing USB2 Controller Hubs only offer limited battery charging and require external memory for configuration, Microchip’s new UCH2s integrate “Quad Page” configuration OTP Flash memory, which reserves space for interoperability and other customisations by the designer, including four separate configuration opportunities. Additionally, Microchip makes it easy to generate configuration settings and programme the OTP memory, via its new ProTouch Configu­ration Editor software tool, also announced today.
The ProTouch Configuration Editor software tool is available today via a free download from www.microchip.com/get/2M4E. It is bundled with the ProLink programming software. Also being announced today is the USB2534 Eval Board (EVB-USB2534), which is available now priced at $399 each. This board supports the development of USB charging designs using the new three-member USB253X UCH2 family for mainstream USB2 applications.