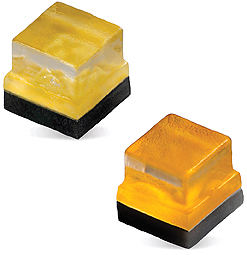 Mouser Electronics, Inc. announced it is stocking the new XLamp® XQ-B and XQ-D LEDs from Cree, their smallest lighting-class LEDs, offering breakthrough size and light distribution. Cree XLamp® XQ-B and XQ-D LEDs deliver lighting-class reliability and a wider spread of light than typical plastic packages. Built on Cree’s revolutionary SC3 Technology Platform, the XLamp XQ LEDs deliver the unique combination of small size, reliability, and novel light distribution. This combination of features enables the next generation of designs for applications that require broader light distribution, such as omni-directional lamps and fixtures. The XQ LEDs are Cree’s smallest lighting-class LEDs at just 1.6 x 1.6mm, 57% smaller than Cree’s XLamp XB package. The ceramic-based XQ LEDs deliver reliability comparable to Cree’s other ceramic high-power LEDs, such as the high-performing XP or XT LEDs. The XQ LED also features an innovative light-emission pattern where more light is directed to the sides than straight out of the package. Compared to standard LEDs, XQ LEDs allow the use of fewer LEDs to achieve a wide, distributed light pattern. Together, these innovations enable manufacturers to increase the light output, reliability, and omni-directionality of their designs.