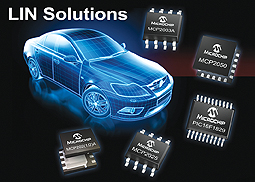 Microchip announces the expansion of its LIN portfolio with the LIN 2.1 and SAE J2602-2 compliant and low-power MCP2003A transceiver, MCP2021A, MCP2022A, MCP2025 and MCP2050 LIN System Basis Chips (SBCs), and PIC16F1829LIN System in Package (SiP). These devices include high-integration options, such as a voltage regulator, windowed watchdog timer, battery-monitor output and a MCU. Additionally, they feature high robustness, including high Electromagnetic Compatibility (EMC) and Electrostatic Discharge (ESD) levels of more than 15 kV on the LIN bus and battery-voltage pins, meeting or exceeding automotive manufacturer requirements such as Version 1.3 of the “OEM Hardware Requirements for LIN, CAN and FlexRay Interfaces in Automotive Applications.” The voltage regulator that is integrated on some of the devices has also been specifically designed to operate in the automotive environment, and can withstand reverse battery conditions, +43V load dump transients and double-battery jump starts. This robustness enables reliable communication in harsh environments, and the high level of integration lowers cost and complexity while saving space. The new PIC16F1829LIN SiP incorporates an 8-bit Flash MCU, a voltage regulator and a LIN transceiver, in addition to peripherals such as a 10-bit ADC, comparators and timers; all in a 20-pin SSOP package. This adds to Microchip’s wide range of eXtreme Low Power (XLP) 8- and 16-bit PIC® microcontrollers with integrated enhanced USART peripherals.
The enhanced USART peripheral enables easy connectivity to LIN physical layer transceivers and SBCs. Whether SiP or standalone solutions, Microchip’s XLP MCU sleep currents, which are as low as 9 nA, make them well suited to direct-battery applications and enable less drain on vehicle batteries.