It’s all about the contrast: OLED displays are now also available for industrial applications 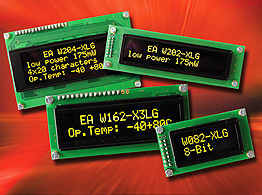 A high contrast ratio combined with a good readability from all angles are key quality factors for many display applications. These characteristics are standard features of screens based on organic light-emitting diodes (OLEDs), which in the past have not been rugged enough to be broadly implemented for industrial use. The display manufacturer Electronic Assembly is aiming to target that issue. The implementation of a patented technology can dramatically increase the life time of OLED displays.

Using OLED displays is not just a favorable option in terms of aesthetics , since they also feature an extremely high contrast ratio of at least 2000: 1. A high contrast considerably improves the readability of displays. The same applies for a further important characteristic of OLED displays, the extremly wide viewing angle. Industrial applications where high-quality materials and pre-fabricated assemblies are often processed that also require quick response times. A good readability can significantly contribute to the safety of the overall system as well as for the persons working on it. Till now, however, the primary implementation of OLED displays was limited to consumer electronic products such as smart phones and digital cameras. The reason for this: In comparison to conventional displays the limited service life expectancy rendered the organic display panels unsuitable for use in products with a long service life.

But now, this is about to change. The display specialist Electronic Assembly introduced a range of OLED displays into the market, whose life time absolutely rivals that of conventional TFT and LCD panels. At room temperature, these products can deliver a service life performance of 100,000 operating hours and more – a life expectancy that most conventional display units can’t nearly provide. Hereby, the displays are not just limited to the operation under favorable room temperatures, they can also flawlessly function in machine rooms and other demanding environments. With a maximum operating temperature of 80°C, they are able to operate under conditions that are far too extreme for human mankind. And even after 14,000 operating hours under these thermal conditions, the new OLED displays can still deliver 50% of their initial brightness. Even under arctic temperatures these OLEDs are not prone to failures – on the contrary. They can even be operated at
-40°C without any loss of contrast. Unlike conventional LCD displays, whose reaction times become increasingly slow at lower temperatures, OLEDs maintain their extremely fast response time of 10 microseconds even at subzero temperatures.