The advent of wireless personal area networks (WPANs) and wireless body area networks (WBANs) has created the need for sensing and monitoring solutions that can support continuous data streaming with extremely low power consumption. Today’s wearable medical systems are targeted at applications including on-site and remote patient monitoring, mobility therapies and the management of diseases such as sleep apnea, and are used in environments where frequent battery replacement would be difficult and expensive. While solutions for these short-range applications previously required AA or AAA batteries, they can now be powered by a new generation of micro-power batteries – as long as power efficiency is optimized. Now, the advent of ultra-low-power short-range radio transceivers is enabling low-cost button cell or small lithium ion batteries to support continuous data streaming in WPANs and WBANs for up to two weeks before replacement.

WPANs occupy a network space around an individual that covers the living or working space nearby (typically up to ten meters), and are implemented with protocols such as Bluetooth and Zigbee. WBANs occupy a smaller wireless space of approximately one meter around a person and are used for sensor communication associated with the human body. Applications have expanded from heavily duty-cycled spot measurement to more data intense continuous links. There are a variety of uses for this technology in hospital and clinical facilities, clinical home monitoring and ambulatory applications, and consumer health and fitness (see Figure 1). Many issues must be considered when selecting a short-range radio transceiver capable of optimizing power efficiency in these networks. Among these, power supply voltage is particularly important. Most sensors run on a single battery cell depending on chemistry, so sub-2 Volt (v) supply voltages are preferable. 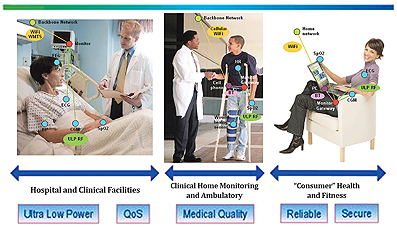 This means that short-range radio transceivers must be designed for low-voltage operation – ideally, down to 1.1V in order to optimize design flexibility and reduce power management constraints. In contrast, radios that ope­rate at 2.5V consume twice as much power as those with the same current consumption operating at 1.25V. Operating at higher voltage is only required when output power in excess of 5dBm is needed. In short-range applications, output power rarely exceeds 0dBm. Other key power supply considerations include the ability to maintain transceiver and receiver performance, and the use of a current profile without excessive peaks to fit supply impedance.
Another key issue is peak current. Almost all wireless-based sensor networks rely on some level of duty-cycling to save power and restrict the usage of radio space, which generates peaks in the current consumption profile of the sensor. Low peak current consumption in the radio transceiver reduces constraints on the wireless sensor’s power supply.
Output impedance is also important, as it has a major effect on power amplifier (PA) power consumption. Most radios have output impe­dance below 100 Ohms. Low impedance is only required for high-output-power, long-range applications, however, and results in up to five times higher current consumption than higher-output impedance options that are more suited for short-reach wireless interconnect applications. Overall, assuming a similar receiver sensitivity and PA efficiency, a high impedance 900MHz radio would use only 1mW in its PA to achieve the same range as a 50-Ohm 2.4GHz radio using 25mW to 40mW.
The choice of carrier frequency also influences power consumption. The two available options within the medical (ISM) radio band are 2.4GHz or sub-GHz frequencies. The most prevalent 2.4GHz protocols are Wi-Fi®, Bluetooth® and ZigBee®. In low-power and lower-data-rate wireless medical monitoring applications, however, sub-GHz wireless systems offer several advantages, including reduced power consumption, as well as longer range for given power.
The Friis Equation quantifies the superior propagation characteristics of a sub-GHz radio, showing that path loss at 2.4GHz is 8.5dB higher than at 900MHz. This translates into 2.67 times longer range for a 900MHz radio since range approximately doubles with every 6dB increase in power. To match the range of a 900MHz radio, a 2.4GHz solution would need greater than 8.5dB additional power. Another benefit of sub-GHz carrier frequencies is that they reduce the risk of interference from airways that are crowded with colliding 2.4GHz Wi-Fi®, Bluetooth® and ZigBee® signals used in in everything from wireless hubs and computers to cellphones and microwave ovens. Sub-GHz ISM bands are mostly used for proprietary low-duty-cycle links and are not as likely to interfere with each other. The quieter spectrum means easier transmissions and fewer retries, which is more efficient and saves battery power.
Furthermore, the narrower sub-GHz bandwidth creates higher receiver sensitivity and allows efficient operation at lower transmission rates. For example, at 300MHz, if the transmi­tter and receiver crystal errors (XTAL inaccuracies) are both 10 ppm (parts per million), the error is 3kHz for each. For the application to efficiently transmit and receive, the minimum channel bandwidth is two times the error rate, or 6kHz, which is ideal for narrowband applications. The same scenario at 2.4GHz requires a minimum channel bandwidth of 48kHz, which wastes bandwidth for narrowband applications and requires substantially more operating power.
Carrier frequency also has a major impact on the average power budget at the network level.
Zigbee and Bluetooth offer highly sophisticated link and network layers, but these stacks account for up to 50 to 75 percent of the radio power consumption, with larger overheads. For ultra low-power systems, the “one size fits all” standardized option is rarely the optimum solution. Instead, designers developing solutions for ultra-low-power applications should consider using the protocol best suited for their need.
Finally, link data rate is one of the most important factors influencing power consumption in duty-cycled wireless links. The average power is almost inversely proportional to the link data rate; for instance, a 100kbps radio will consume almost half the power of a 50kbps radio for the same payload. When comparing RF transceivers, “energy per bit” is a better indicator of power efficiency than current consumption. But high data rate radios are often those with the higher peak currents, and these are highly undesirable for most small batteries as they result in large, leaky, storage capacitors. 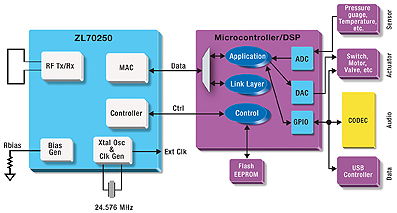 Figure 2: Block diagram of a typical wireless sensor based on the ZL70250.

Each of the aforementioned factors is critical for applications where power is at a premium and payload is greater than 10 bits/sec.
Whereas previous body-worn wireless sensors could only be used for slowly varying parameters, new RF technologies can be used to help observe more rapidly changing physiological parameters, such as heart and brain electrical activity or blood oxygenation, that require data rates on the order of 0.5 to 5 kbit/s to extract meaningful waveforms.
One example of a solution that delivers this level of performance is the ZL70250 transceiver from Microsemi (see Figure 2). Housed in an approximately 2mm × 3mm chip-scale package, it has standard 2-wire and SPI interfaces for control and data transfer using any standard microcontroller. The microcontroller’s analog-to-digital converter (ADC) connects to the ultra-low-power analog front-end device. Combined with the ZL70250 transceiver, the resulting solution can be used to develop a wireless ECG solution that can run continuously from a CR series coin cell for up to a week. Similar power efficiency can be achieved with such devices as a 3-axis accelerometer or pulse-oximeter for patient respiration measu­rement, as well as a variety of other wearable health monitoring platforms.
The advent of micro-power batteries along with advances in ultra-low-power transceiver technology are making it possible to build smart, flexible and smart wireless sensors. Proper transceiver selection is critical for addressing a variety of key design issues so that wearable wireless medical devices can perform continuous monitoring of bio-signals for long periods using a single, low-cost battery.

Reghu Rajan received his B.S. degree in Biomedical Engineering from Cochin University of Science and Technology, India in 1996, M.S. degree in Electrical Engineering from Oklahoma State University in 2001 and is currently pursuing to receive his MBA at San Diego State University. His master’s thesis involved wide range RF power sensor for the US military (SPAWAR, San Diego). He started his career with GE Medical systems at their Medical Imaging division in 1996 and moved on to power electronics and circuit design for Grentel Technologies Limited (India). From 2001 to present he has been working with Communication & Medical Product Group at Microsemi, San Diego, where his job roles included analog and RF circuit design for Ultra Low-power Radios and his current role is in technical marketing for the wireless health care area.