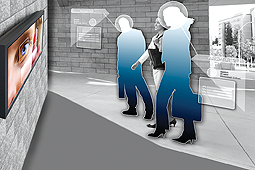 In close cooperation with Intel, DSM Computer has integrated the Intel® AIM Suite Web-based software in its large-area industrial displays. The Intel® AIM Suite is used for the anonymized detection and analysis of the screen observer’s eye contact. An industrial display system with 140 cm (55 inch) diagonal, integrated camera and a built-in PC platform with the Intel® QM67 chipset and the Intel® Core™ i5-2710QE processor specially developed by DSM was presented for the first time at the Embedded World 2012. The Intel® AIM Suite detects how long the observer’s attention remains directed at the large screen. The gender and the age group of the person can also be determined. The anonymized data that can be transmitted in real-time via a Web portal can be evaluated after 24 hours at the earliest. This time interval ensures the further anonymization of the data and so precludes a direct reference to the viewer in front of camera. These features open a number of interesting applications for the large-area displays with the Intel® AIM Suite. For example, the eye contact of the viewer can be followed over the course of time.