VPG offers precision resistors with operating temperature over +175°C and Load Life Stability of 0.005% for High-Temperature Energy and Transportation Applications 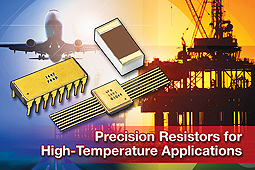 Vishay Precision Group, Inc. announced that its Vishay Foil Resistors division (VFR) is now offering a wide variety of resistors built on Bulk Metal® Z- and Z1-Foil technology for high reliability and stability in high-temperature applications and harsh environments. Z- and Z1-Foil foil resistors are available in a variety of configurations. Devices such as the VCS1625Z, VCS1625P, CSM2512, and CSM3637 offer four-terminal Kelvin connections for high reliability and accurate current measurement, and the FRSH and VSMP series feature wraparound terminations to ensure safe handling during the manufacturing process, as well as to provide stability during repetitive thermal cycling. The flexible terminations of the SMR1DZ and SMR3DZ ensure minimal stress transference from the PCB due to differences in linear CTE (coefficient of thermal expansion) while the hermetically sealed packages of the VHP100 and PRND series eliminate the ingress of moisture and oxygen. For hybrid circuits, the HTHG is connected with gold wire bonding while the HTHA is suitable for aluminum wire bonding technology.