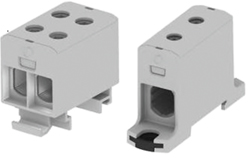 Trade reliability, soundness of every action, speed and flexibility are the motto of Morek company. Morek operates in the territory of Lithuania, Latvia and Estonia. It manufactures automatic and electrical engineering subassemblies.
The products offered by Morek Group are also available in Poland – in TME range of products. The assortment includes, among others: terminals and splice terminals.

Electrical engineering, power engineering, industrial automatics are the areas where the necessity of connecting high-current power leads is often required. The system of mounting equipment on a DIN bus, commonly used in automatics, greatly facilitates installers’ work, it has been tested against durability and comfort of work. At the same time, it ensures very good after-market service of the used equipment. Damaged equipment can be quickly replaced with a working one, and such replacement does not cause a long down time, e.g. of a manufacturing line.
As electricians say: “each equipment works more efficiently when it is connected to the mains”. However, the problem is how to provide proper quality of such connection. The difficulty of this task increases proportionally with the increase of distributed currents intensity. One of the most reliable methods of fast installation of connection elements includes usage of screw terminals. Different variations of such terminals are commonly used starting from electronics to industrial automatics.

Morek universal terminals
Morek’s offer begins with a single way, universal DIN bus-mounted terminals adapted for aluminum and copper conducts. They are available in several colour versions (grey, blue and yellow-green) with two or four terminals. Those elements have been divided into several groups depending on the number of terminals and conduit intersections, which can be attached to them. The conduit, in a clear way, influences the acceptable intensity of the current that can flow through the terminal. Nevertheless, an essential parameter is the maximum operating voltage equal to 690V, the same for all groups of described

There is also a group of splice terminals with a double terminal. This group includes the following: T021016, T021050, T021095, T021150 and T021240. The last three digits include the information on the intersection of the conduit that can be attached to a terminal. This parameter together with permissible currents are presented in the Table 1.
Depending on the conduit intersections, different torque can be used. For example, in case of conduit intersection of 1,5 mm2, it is equal to 1,5Nm and respectively: 3,5Nm for conduits of 2,5…6 mm2 and 7Nm for conduits 10…16 mm2.
In TME range of products, there are also Morek 4-terminal splice terminals. Their parameters are presented in the Table 2. High current-carrying capacity deserves a special attention.
In this case, depending on the conduit thickness, the use of diversified torque is recommended. For example, in case of T022240 splice terminals with the conduit intersection of 150 … 240mm2, it can be equal to as much as 55Nm.
All above described splice terminals do not require the mounting of side walls.
They are mounted on the DIN bus by means of specially designed snap locks, and if this is necessary to use another method of mounting, two screws can be used instead. Fixing conduits to screw terminals depends on the terminal type and conduit intersection. Examples of the values are presented above.
All offered splice terminals correspond to the power engineering requirements. They have the CE, UL1059 and SGS certificates, and comply with the SFS 2663 norm.