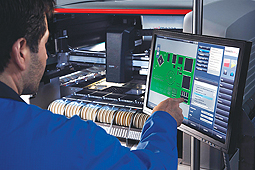 ePlace 4.0 is the most modern graphical user-machine interface from Essemtec. Currently, various SMD placement machines are compatible with ePlace, including Paraquda and Cobra.
ePlace 4.0 uses Windows 7/64 bit as its operating system. Windows 7 is replacing Windows XP more often in business applications and machine controls because 64-bit computers can calculate highly accurate numbers and measurements faster. Operators can profit from quicker screen displays and faster calculations of complex simulations and optimizations. The Windows 7 operating system simplifies the integration of the pick-and-place machine in a company’s network. The fact that ePlace 4.0 now works with an SQL database further eases the integration. The user can chose between MS-SQL, MySQL and PostgreSQL. In the past, ePlace used a highly efficient XML database, which remains available with the 4.0 release. However, data now can be exported from XML to an SQL database and vice versa via a simple mouse click. ePlace 4.0 is as easy to understand as previous versions because the user interface appearance remains unchanged. However, user help has been expanded with numerous additional documents and process information. Many details of ePlace have been adapted to customers’ growing needs. For example, components with no visible leads such as BGAs now can be shown from bottom-up alternatively. In conjunction of ePlace with the pick-and-place machine, the vacuum detection of the placement head has been optimized. The vacuum generator is now stabilized in tighter limits. As such, pick-up errors can be detected quicker and more reliably for even the smallest components.